During the summer gardening months, you may have noticed a few spots or bugs on your vegetable leaves or grapevine leaves. There’s a chance that you may have Japanese Beetles in your garden. If you don’t know how to get rid of Japanese beetles, you might lose most of your garden. 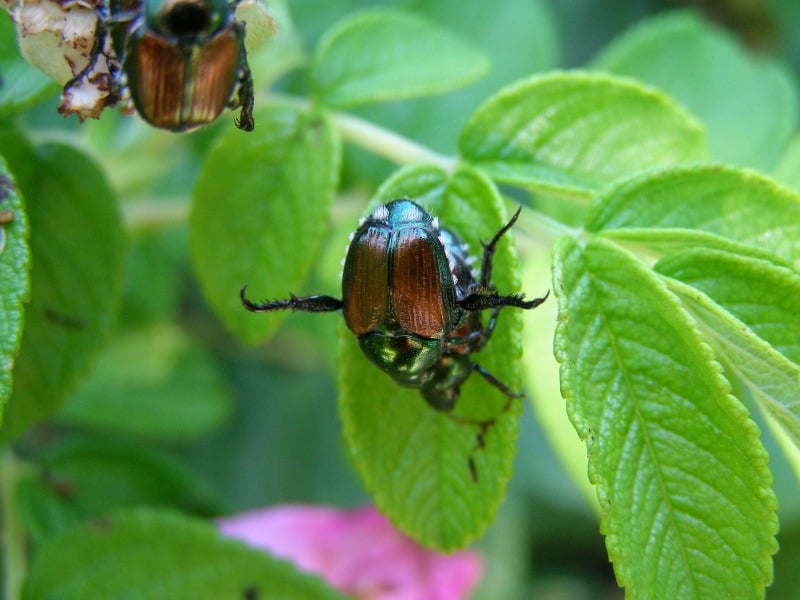 What are Japanese Beetles?

Japanese beetles are a common form of beetles that are often found on the leaves of vegetables, fruits, and flowers. They have a shiny body with brown wings and can be found in groups or on their own.

Known for laying eggs their entire adult life, they can lay eggs quickly and can produce anywhere from 40 plus eggs that will start out as grubs and feed off the base of your plants before growing and starting to eat at the tops. Rain doesn’t deter them and moist areas actually help in keeping their eggs and grubs from drying out.

What damage can Japanese Beetles do? 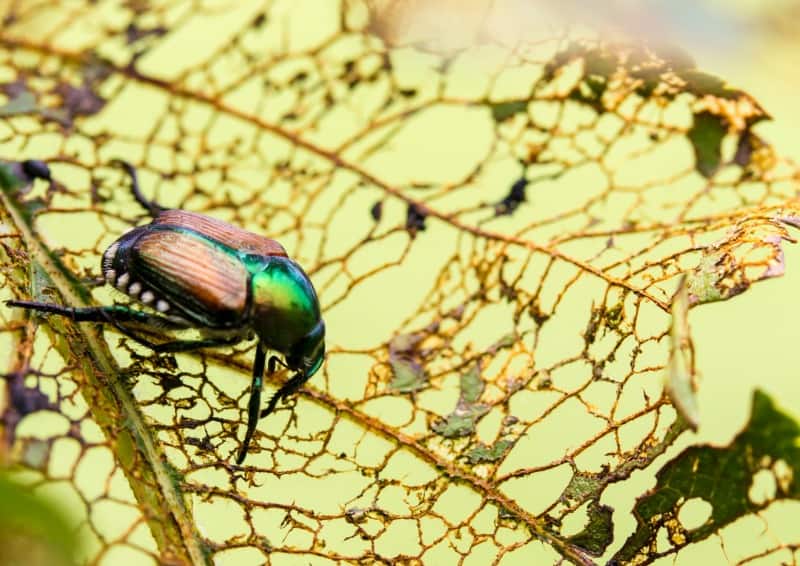 The short answer: A LOT! Throughout their life cycle, they focus on various areas of the plants. At a young age, they are in the soil and near the roots and base of the plants. As they grow, they will start to focus more on the leaves and the veins of the flowers and vegetables.

Not only can they kill off sections of your garden (and even your entire planted crops!), but they can also attack your grass, your flowers, and many other outdoor plants as well. If not detected and caught early, they have the capability to put a huge damper on the growth and survival of your outdoor plants.

What plants will Japanese Beetles eat?

It depends on the life stage of the beetles. In the grub stage, they eat grass and the roots of your vegetables. As adults, they love the fresh leaves of many plants, shrubs, and trees.  Here are just a few:

How to Get Rid of Japanese Beetles 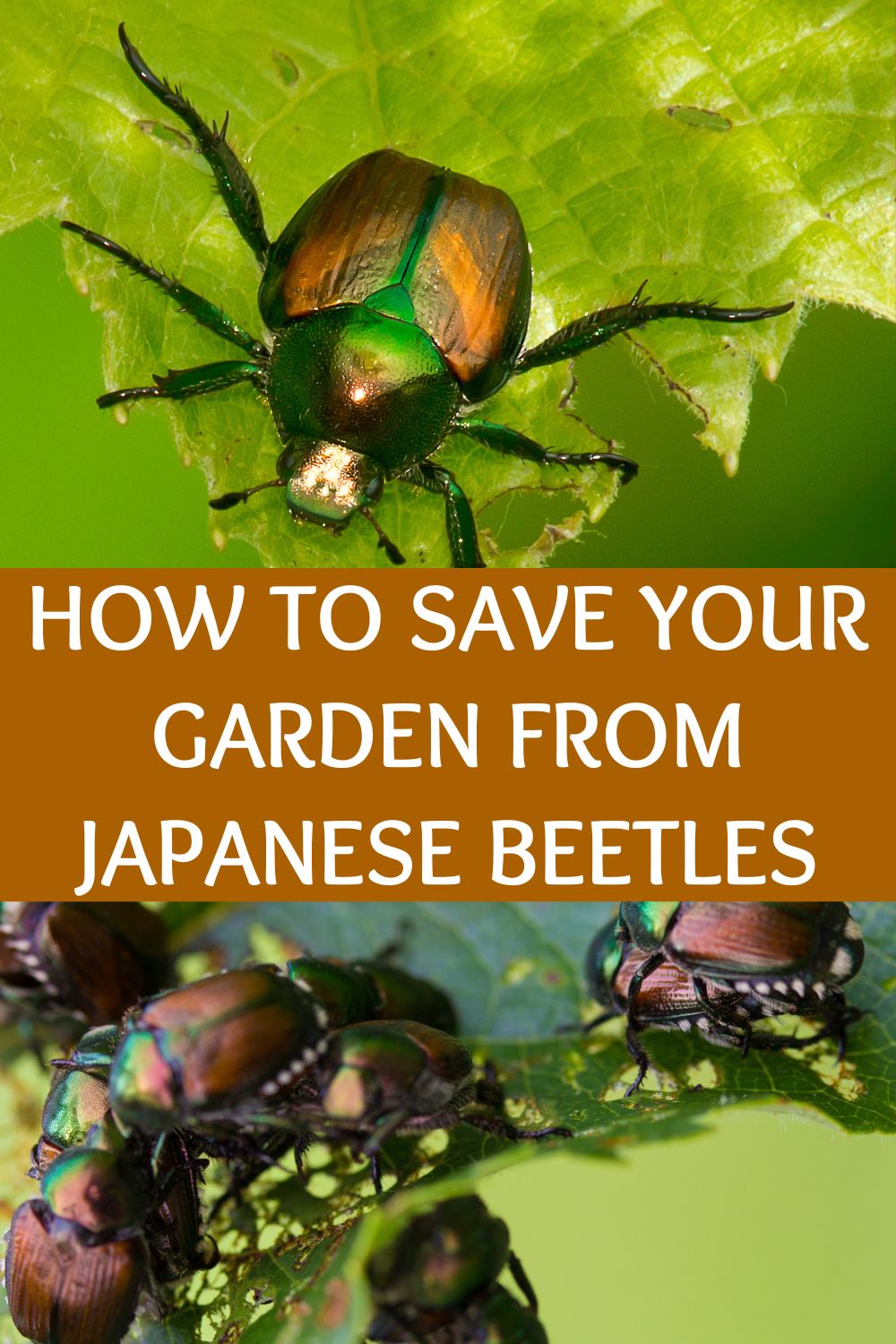 There are many methods through which you can try to rid of the Japanese Beetles. While you can use pesticides that kill them instantly, I prefer natural and organic options.

If you notice them early enough, you may be able to pick them off your leaves and out of the soil before they really start to spread.

Better yet, get a plastic container with some water and a squirt of soap and go get them! Place the cup under the leaves when you see the bugs and tap the leave gently: they’ll fall right into your soapy water.

Good to know: Japanese beetles like to play dead when they perceive danger, so they’ll “drop dead” if you move their leaf or get too close. If you position your cup of soapy water right, they’ll fall right into it, and they die almost instantly. 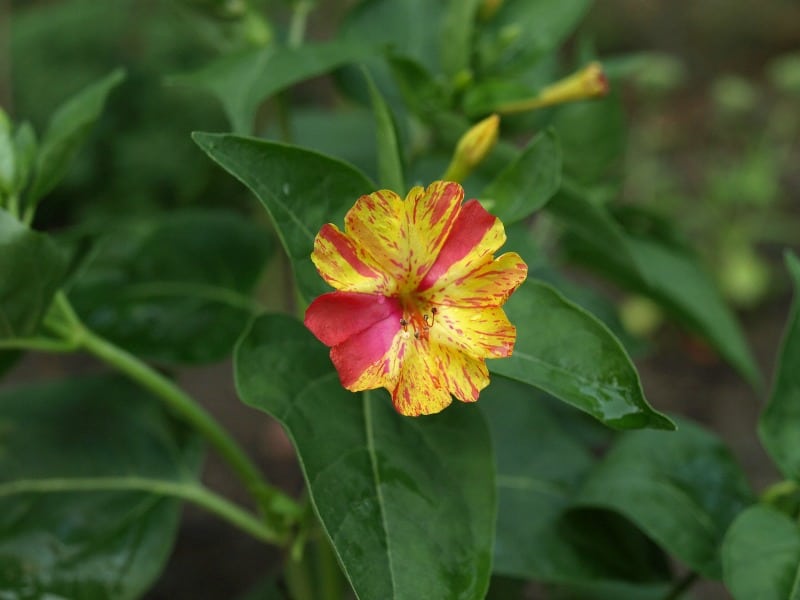 The beetles can’t resist their leaves and it kills them. The flowers open up around 4 PM – 5 PM and they smell wonderful.

They close back up in the early morning.

The first year just a couple of Four O’Clocks killed about 90% by the end of summer. The rest died the next year and we didn’t see any more until we moved to a new place. 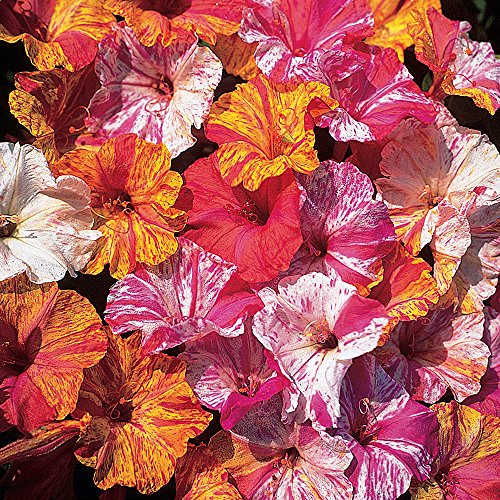 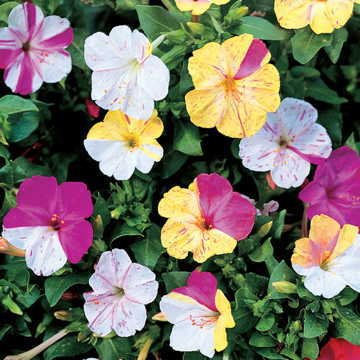 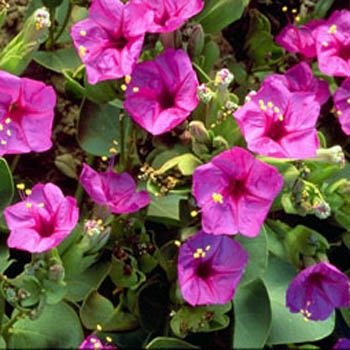 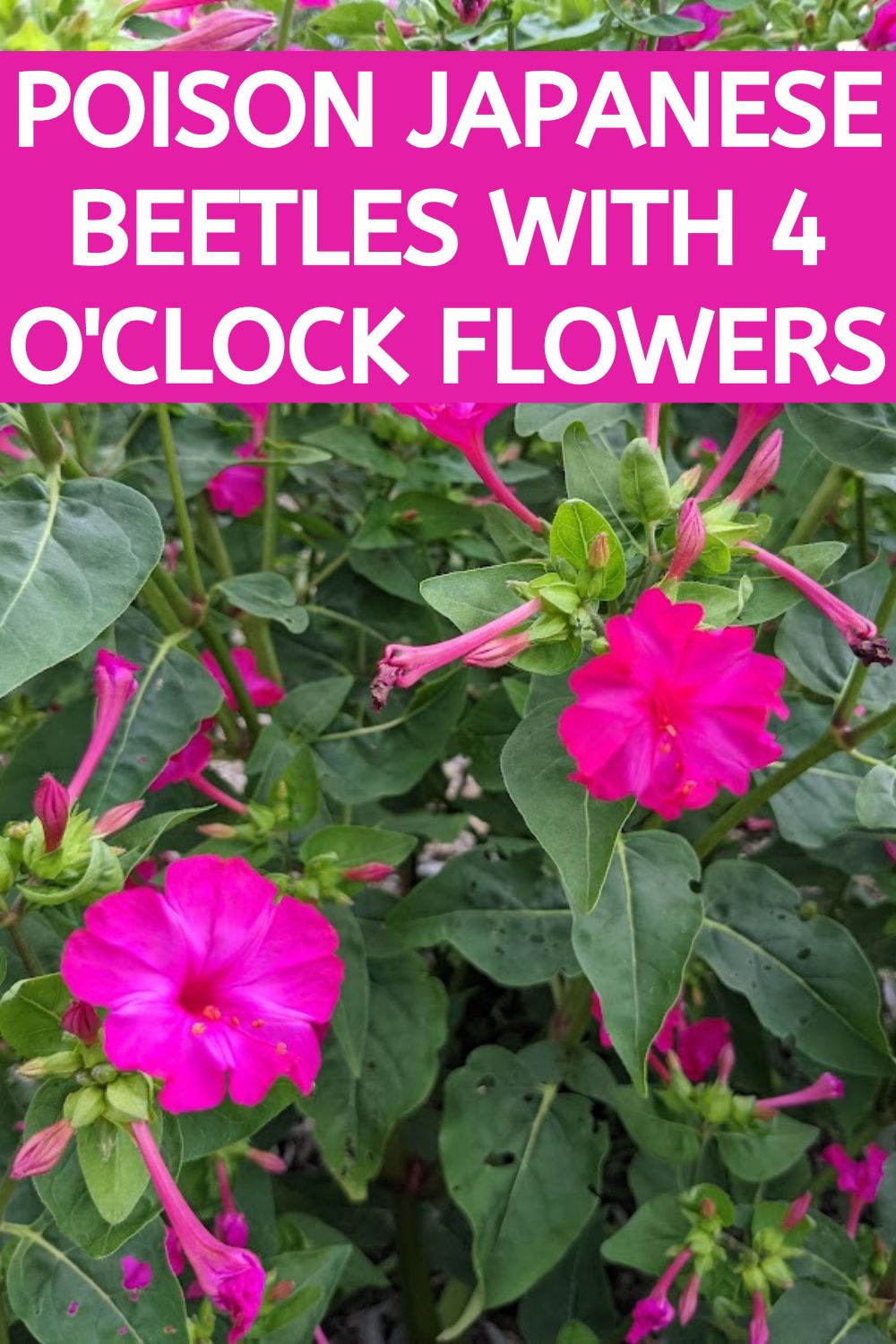 Another homemade method for getting rid of Japanese beetles is to mix 1/3 gallons of warm water with a packet of yeast, 1/4 cup of sugar, a small piece of ripe banana, and a tablespoon of dish-washing liquid. Mix all of it in an empty milk jug you cleaned out, and hang it close to where Japanese beetles are attacking your garden.

If you want to see how this is made, take a look at the video below:

Don’t use harmful chemicals when you can just make your own! Combine a teaspoon of dish-washing detergent and a cup of vegetable oil and mix together.

Once combined, add to a quart of water and spray on the beetles at varying intervals. Some say to use it over a 10-day period for best results.

Always spray early in the day if possible as that is also when they will be a lot more active!

5. Plant plants that do not attract Japanese beetles

While Japanese Beetles aren’t finicky, there are certain plants that they do not seem to like as well. In your garden, they will stay away from cabbage and kale and if you are looking for a fruit tree that seems to be immune from them, plan ahead and plant a pear tree. You’ll save yourself a headache if you can just avoid certain plants altogether!

6. Use a store-bought beetle trap

If all else fails, you might want to try a beetle trap. Many argue that you’ll attract more beetles to your garden if you do this, and it may be true. But, you’ll help thin out the Japanese beetle population, and if you place it in a spot away from your garden, it WILL help keep your plants safer. 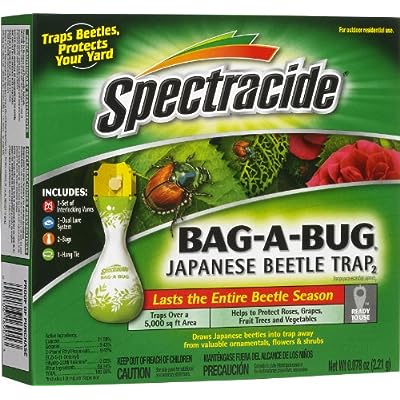 The moment that you notice Japanese Beetles in your garden or on your plants, it’s time to take action. Use the methods above to try a natural approach to see if you can rid of them on your own! The sooner that you can remove them, the better the chance that your garden and your plants will survive!

Have you ever had to deal with Japanese Beetles? What have you done to get rid of them?

If you catch them on the tree and remove them you’ll save the tree. But if enough beetles attack it, in just a few days they’ll eat all the leaves, making it almost impossible for the tree to survive.

Last year we had the biggest Japanese beetles invasion I’ve ever seen and it took down several trees at our local park: so sad!

When do Japanese beetles come out?

Depending on your area, they could arrive as soon as late May. In our area (zone 6b) they arrive in mid-June and stay for about a month.

When are Japanese beetles active?

They are most active in the morning and early afternoon, especially on warm, clear days.

Many birds will eat Japanese beetles: blue jays, robins, starlings, sparrows, and woodpeckers among many others. 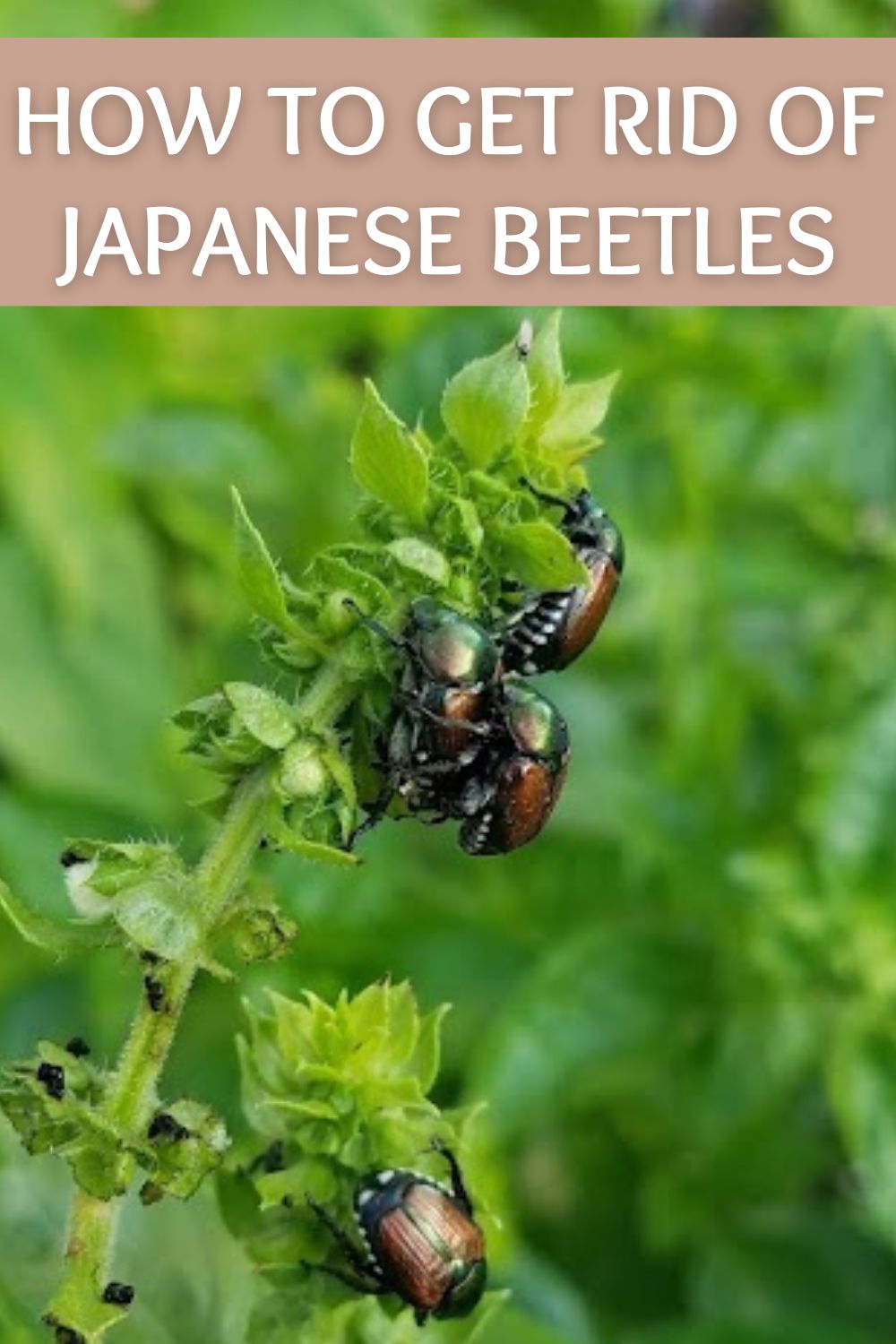 How To Plant A Jane Magnolia Tree For Stunning Spring Blooms

[…] As with any plant, the Jane magnolia is susceptible to a wide range of pests and diseases, which can cause damage to the tree and reduce its lifespan. Some of the most common problems include scale insects, leaf spot, powdery mildew, root rot, and Japanese beetles. […]

6 Best Companion Plants For Dill (And 3 To Avoid)

[…] course, dill, in turn, helps reduce the populations of some onion pests, like aphids and Japanese beetles. Some gardeners claim that dill also improves the flavor of […]

11 Best Companion Plants For Cucumbers (And 6 To Avoid)

[…] take up much aboveground space, either! Plus, belonging to the pungent allium family, onions deter pests like Japanese beetles, aphids, and even […]

Use BeetleGone or GrubGone it's a specific isolated soil bacteria from a strain of Bacillus thuringiensis galleria, which only attacks Japanese beetles and other scarab beetles such as June bug. It is one of the few Bt strains that actually works on the adult form of the insect. Spray on the plant that the beetles are feeding on and it will stop the feeding immediately when it gets into the insects gut and paralyzes it. Use GrubGone on your turf areas in Sept. when and where the grubs (larvae) feed, on the grass roots; to eliminate next year's beetle crop. Unlike milky spore which takes 5 years to spread and build up, it will work immediately; but only lasts one season. So use both if you have large expanses of turf, or treat the whole neighborhood as a community project. It is available exclusively from: growitnaturally.com Expect to pay about $60 for the smallest unit, but the dry powder will be viable for 3 years. Also peonies attract and feed tiphia wasps which parsatize adult beetles. This is actually the first I have heard of the Mirabalis (4 O'Clocks) connection and I have 60 years of organic horticulture experience.