While many flowering plants open their blooms during daylight hours and close up shop for the nighttime, others follow the reverse schedule. These evocative night blooming flowers have, in many cases, co-evolved with such nocturnal pollinators as moths and bats, and frequently have ornate, often white or otherwise bright-colored flowers giving off a strong perfume. Some blooms may open at dusk and close with the first rays of the sun; others may stay open during the day, but release their most pronounced aromas in the evening or overnight hours to draw in target pollinators.

The showiness and fragrance of these night flowers makes them popular in cultivation, whether grown as houseplants or part of a “moon garden” (aka “twilight garden,” “evening garden,” etc.). Such species and varieties are often employed to the fullest effect when planted along lit pathways, edging water features, or arranged around patios and decks to enhance evening R&R and get-togethers.

The following 10 plants are examples of night-blooming or night-scented flowers coveted for moon gardens.

A member of the so-called “orchid-cactus” genus, Queen of the Night or Dutchman’s Pipe Cactus is a tropical, epiphytic cactus celebrated for its night-blooming flowers. It’s one of quite a number of cacti also known by the generic common name of “Night-Blooming Cereus.”

The Queen of the Night’s white blooms appear rarely – sometimes but once a year – in late spring and early summer, and they’re truly after-hours phenomena: they fold up before daybreak.

Sporting spineless stems that may reach 20 feet, this cactus lights up nighttime canopies from southern Mexico down into South America.

Appropriate for USDA Hardiness Zones 10a to 11b, it’s widely cultivated as a houseplant, doing well in pots when given full sun (ideal) or partial shade and well-drained soil.

Here’s another so-called “Night-Blooming Cereus,” this one a straggling cactus native to the Sonoran and Chihuahuan deserts of the American Southwest and northern Mexico.

The Arizona Queen of the Night or Deer-Horn Cactus, which often leans and curls upon sturdy desert shrubs such as ironwood for support, is near-legendary for its midsummer blooms. Its attractive, extremely fragrant, trumpet-shaped white flowers burst out after dusk in June or July, the majority of blooms appearing for only one night and shutting when hit with early sunshine. Hawk moths are the prime pollinators.

The sometimes rather enormous tuber of the Arizona Queen of the Night (it may weigh more than 40 pounds) served as a nutritious food source for Southwestern native peoples.

The cactus can be planted in USDA Hardiness Zones 9a to 10b and is particularly well-suited to rock gardens. (Unfortunately, unscrupulous collectors have dramatically reduced wild populations of the Queen of the Night in some regions, something to be aware of.)

This perennial bulb produces a leafless flowering stalk on the heels of rainfall, the result being a solitary, ephemeral, six-petaled white bloom that unfurls in the evening and lasts only a few days. As it ages, the flower turns pink, continuing its special, fleeting, eye-catching show. Although the flowering window kicks off in late spring, peak bloom tends to come in late summer and early fall.

Also known by such common names as Evening Star Rain Lily, Giant Rain Lily, and Hill Country Rain Lily, this forb is native to grasslands of the south-central and southwestern U.S. and northern Mexico.

Hardy in USDA zones 7a to 10b, the praire lily can readily be established in lawns (it holds up well to mowing) and flower beds; it needs well-drained soil and blooms best in full sun.

Also known by the common names Ever-Flowering Gladiolus, Night-Scented Gladiolus, and Marsh Afrikaner, this wildflower hails from southern Africa but does well (and is widely naturalized) in other Mediterranean zone climates such as California.

Reflecting the unique precipitation patterns of such winter-rainfall regions, the Evening Flower Gladiolus emerges with the early fall rains, then, in early spring, grows tall flowering stems that produce arresting white or yellow blooms. These flowers exude a powerful perfume in the evening and overnight hours, providing quite the aromatic contribution to a moon garden.

Hardy in USDA zones 7b to 11, the Evening Flower Gladiolus favors full sun and extremely well-drained soil and requires only modest amounts of water. 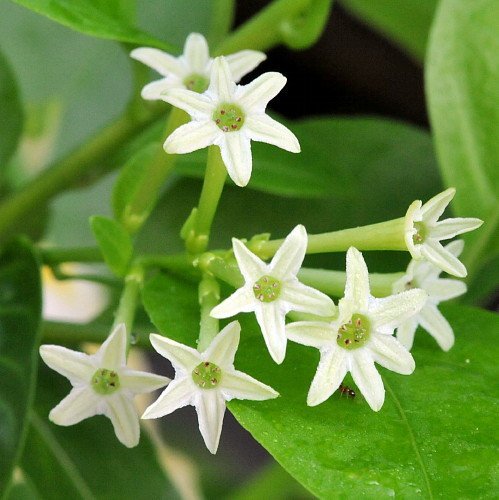 This evergreen shrub, which may reach 12 feet tall, is famed for its nocturnal flowering. Native to the West Indies, the Night-Blooming Jessamine, also known as the Lady of the Night, the Night-Scented Jessamine, or (erroneously) as the Night-Blooming Jasmine, is part of a genus widespread in the subtropical and tropical Americas. Many of these Cestrum species are known for tubular blooms especially popular among hummingbirds.

The skinny, night-opening, greenish or yellowish-white corollas of the Night-Blooming Jessamine, which typically appear from midwinter to spring, often in several rounds of flowering, aren’t particularly eye-catching, but they’ve got a huge superpower: tremendous overnight perfume.

The strong and sweet fragrance from this shrub may extend over several hundred feet, and, in fact, may be too powerful for some. But most find the perfume intoxicating in a good way, and certainly, this Cestrum makes a natural, and, olfaction-wise, showstopping, addition to night gardens in USDA Hardiness Zones 8 and above.

As with many of the plants on this list, a location in full sun usually results in the most luxuriant blooms. 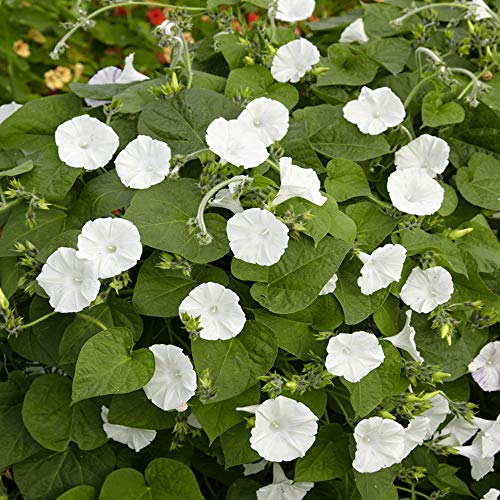 The striking moonflower, also known as moonvine or tropical white morning-glory, is a spectacular vine of the American tropics whose native range extends northward into the West Indies and southern Florida.

It’s an all-around looker, with its deep-green, heart-shaped leaves commonly eight inches in length. In its sultry natural habitat, its draping stems may extend to 70 feet or more.

At dusk, the moon vine’s bold, gently lobed, large white flowers unfold to light up the night with their glow (especially dazzling around the full moon), and to perfume the night as well, given their strong, pleasant fragrance.

Moths, night-flying bees, and bats are natural pollinators. The flowers start closing with the dawn, though they may not fully yield the stage until midday. Cloudy weather can encourage them to stay open in the daytime.

The frost- and cold-sensitive moonflower is hardy as a perennial vine in USDA Hardiness Zones 10 to 12, but is widely grown as an annual in colder climates; even in a single season, it can still produce stems 15 feet long. Requiring structure to twine about, the moonflower’s a great choice for walls, trellises, arbors, and fences, and also does well in hanging baskets. 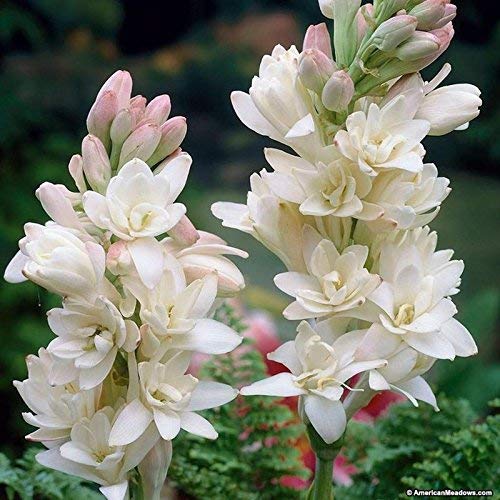 On a beautiful night out in the garden, it’s a pleasure to stroll among the snowy flower spikes of the tuberose, which resemble white-hot torches under moonlight or tasteful artificial illumination.

Rising above the beds of grasslike leaves, those blooms exude a swoony, heavenly scent, backing up the handsome visual aesthetics with an equally attractive perfume. This forb is native to Mexico, although it’s no longer found in the wild: it was cultivated long ago by pre-Columbian cultures.

The tuberose flowers in late summer and early fall. It needs a generous leadup of warm weather to bloom, so in more temperate climates you should start it in a pot indoors.

Suitable in USDA Hardiness Zones 10 to 12, the tuberose asks for full sun, well-drained soil, and moderate amounts of water. Unless your winter lows stay above about 20 degrees Fahrenheit, bring the rhizomes indoors for the cold season. 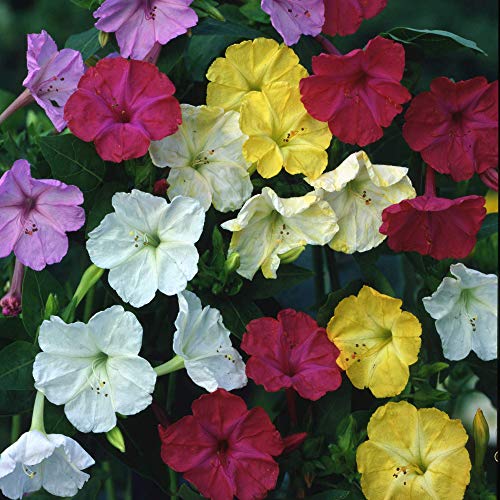 This shrublet is among the most widely cultivated of the “Four o’clock” family, Nyctaginaceae, so-named for their habit of blooming late in the afternoon.

Mirabilis jalapa commonly goes by simply Four-o’-Clock, but you’ll also see this native of the tropical Andes labeled the Marvel of Peru. And, no question, it’s pretty marvelous: The extravagant tubular flowers it unveils as evening approaches (and which usually wilt by the next morning) definitely draw the eye, and they come in multiple hues: red, pink, yellow, white – sometimes on the same plant.

The blooms, which may open up earlier in the day under overcast conditions, often produce a strong fragrance at night, though some may be virtually scent-free.

This plant does well in USDA Hardiness Zones 7 to 10, requiring full sun, well-drained soil rich in organic matter, and average amounts of water. In colder climates, plant them after the risk of late spring frosts has passed, and bring the tubers indoors for the winter.

The stunning Brugmansia shrubs and trees, native to South America, are stars of any container garden or landscaping. And while they’re snazzy enough in form and (evergreen) foliage, it’s the angel’s trumpet flowers that blow people away: pendulous, trumpet-shaped blossoms that, in some species and varieties, may reach two feet or so in length.

The Brugmansia genus includes a variety of species as well as a host of hybrids and cultivars, resulting in quite a diversity of sizes, colors, and blooming patterns.

One popular kind, the Mountain Angel’s Trumpet (B. sanguinea), doesn’t produce a fragrance when flowering, but most have sturdy perfumes that peak in the nighttime.

Angel’s trumpets in temperate climates usually flower from summer into fall, but in tropical or subtropical settings, or in a greenhouse, they may bloom year-round.

Hardy in USDA zones 9 and warmer, these shrubs or small trees (some reach 20 or 30 feet) prefer wind- and frost-sheltered spots with plenty of sun and well-drained soil; they also do well in containers, in which you can overwinter them with minimal water or light demands.

The common evening primrose, native to a broad swath of central and eastern North America and widely naturalized in Europe and other temperate regions, is another good choice for a night garden. Its name derives from the rapid opening of its yellow, four-petaled blossoms as evening falls.

The flowers, magnets for moths as well as crepuscular bees and butterflies, close with the morning sun. They have a sweet fragrance with lemony overtones.

Hardy in USDA zones 4 to 9, the common evening primrose, also known, like other Oenothera species, as the Sundrop, is quite a tough biennial forb capable of growing in lean soils and withstanding some drought conditions, though it does best in well-drained soil with mid-range amounts of watering. Full sun is optimal, but the plant can handle partial shade as well. 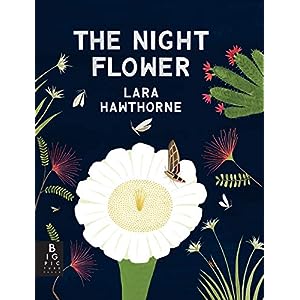 The Night Flower: The Blooming of the Saguaro Cactus 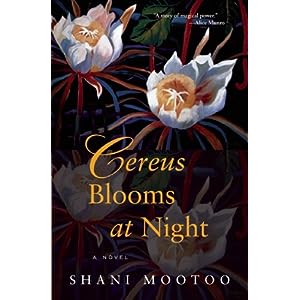