Is tomato a fruit or a vegetable? The answer to this question depends on whether you are a botanist or a chef. Human beings have been naming and classifying things around them since they first learned to speak. Indeed language may have developed partly out of our need to describe and identify things we saw in our environment to others.

Botanists classify a tomato as a fruit, while nutritionists regard it as a vegetable. This is due to differences in criteria. Tomato is the edible, mature, ripened ovary of the tomato plant and, therefore, a fruit. For culinary purposes, it is a vegetable because its flavor profile is savory. 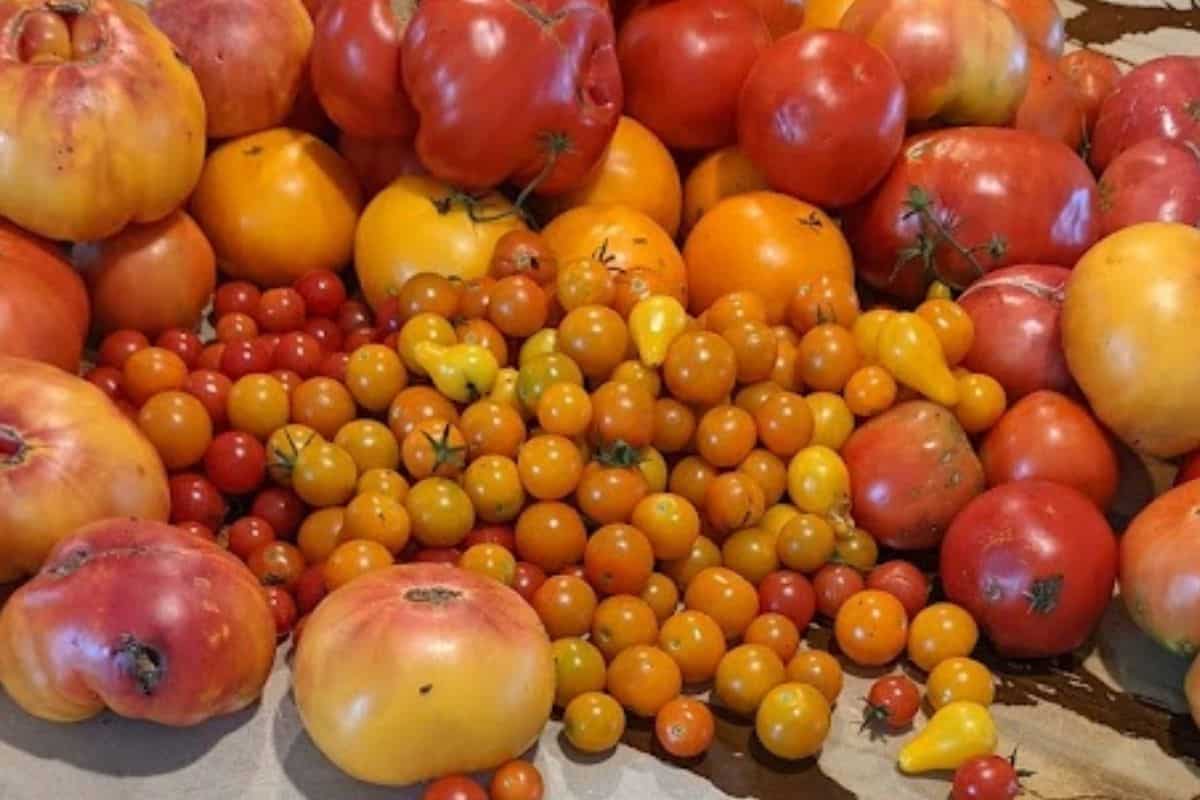 Inevitably, knowledge became split into different disciplines as people studied things from different angles. The word “fruit” comes down to us from Latin via Old French and Middle English, where the root word “frui” meant “to enjoy”. While fruit generally appeals to the culinary sensibilities of just about everyone on the planet, nutritionists will tell you that many people don’t enjoy vegetables as much!

Before we can truly understand what a tomato is, we need to learn the definition of both a fruit and a vegetable. Let’s explore.

The Botanical Definition Of A Fruit 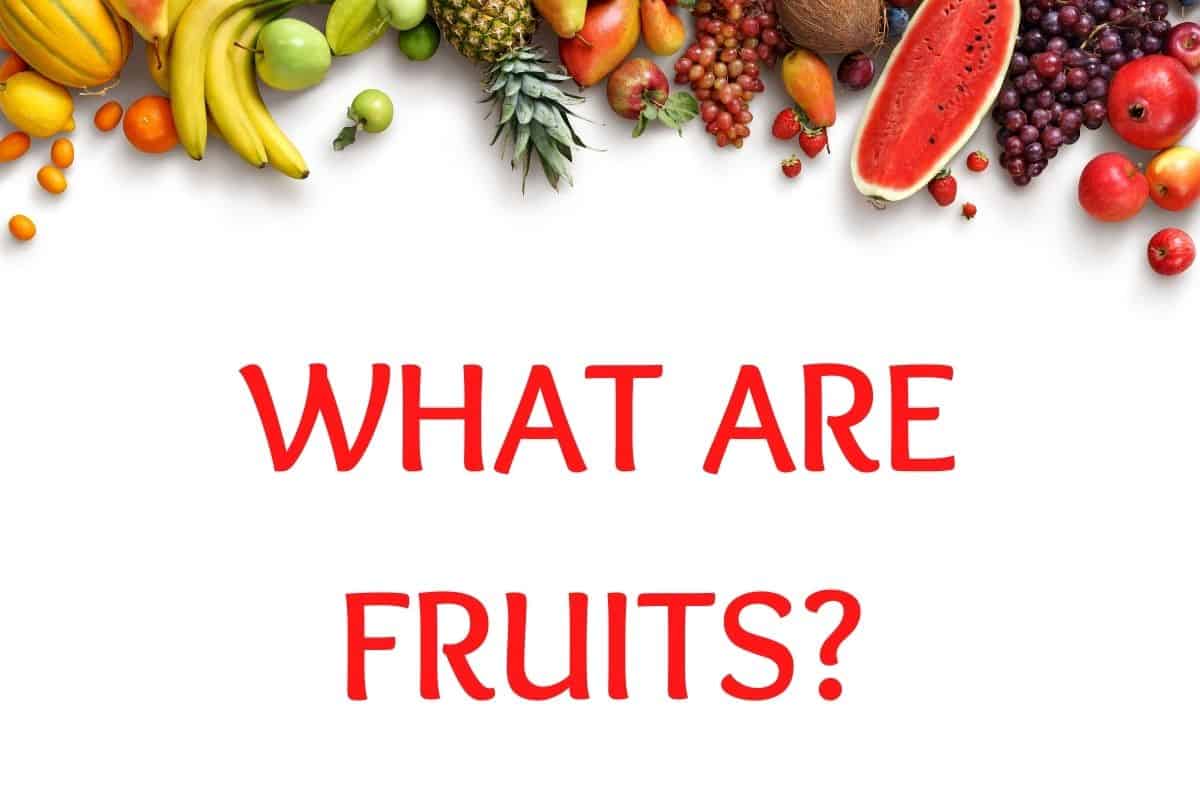 In botanical terms, a fruit is an edible, mature, ripened ovary and its contents. The ovary carries the ovules of a plant and protects them until they are fertilized and turn into seeds. Fruits are attractive to fruit-eating birds, animals, and humans because this helps with seed dispersal.

As botanical science progressed and more plants were discovered, more technical definitions arose concerning what is and is not a fruit. However, ordinary people continued to have their own ideas about how to describe their food.

Like the Eskimos with different words for snow, botanists have developed precise language for different kinds of fruit.

To a botanist, many things that most people would consider to be vegetables qualify as fruit. Examples are aubergines, green beans, okra, pumpkin, squash, and tomatoes. Nuts that have shells are considered fruits, as are corn, zucchini, cucumbers, olives, peppers, and cereal grains. However, we don’t hear most people call them this in common language.

A tomato is unquestionably a fruit to a botanist, but tomatoes have been the subject of considerable controversy over the years. So, how does a fruit compare to a vegetable in botany?

The Botanical Definition Of A Vegetable 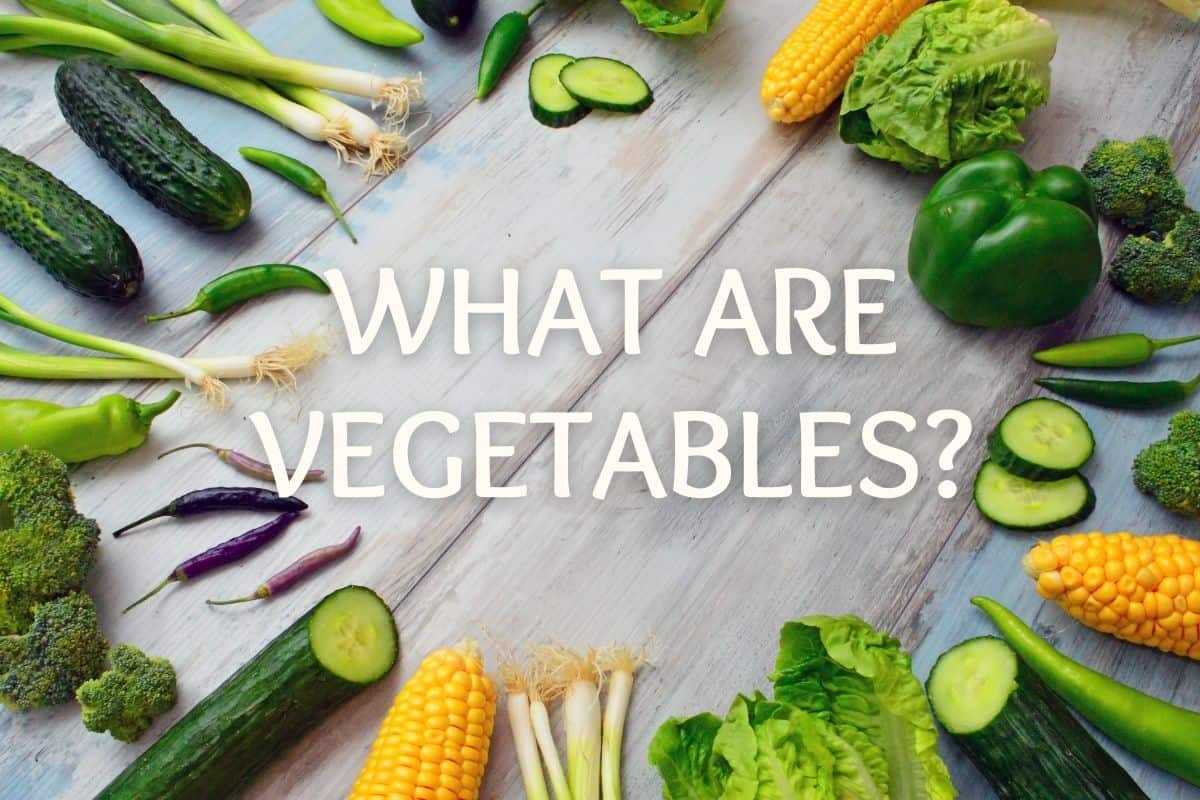 There is no actual botanical definition of a vegetable. The word “vegetable” is a culinary term rather than a scientific one. Botanists tend to define vegetables as the edible portion of a plant that is not a fruit. They classify vegetables according to which part of the plant is edible, for instance, roots, stems, leaves, and flowers.

Broccoli is a flower, rhubarb and celery are stems, lettuce and spinach are leaves, parsnips and carrots are roots. A potato is a tuber, and an onion is a bulb. They are all vegetables.

Mushrooms and other fungi are not even plants, botanically speaking, yet they are classified as vegetables for culinary purposes. Therefore, the term “vegetable” is subjective and open to interpretation because it covers so many different edibles.

Whether a tomato is a fruit or a vegetable was even the subject of a legal dispute. The United States Supreme Court, in a ruling in 1893, decided a tomato was a vegetable. This was specifically for the purpose of tariffs on imports and had no bearing on botany.

Fruit According To Chefs and Nutritionists

Chefs and nutritionists classify fruits and vegetables according to their flavor profile and health benefits, respectively. Savory produce is generally considered a vegetable and can consist of leaves, stems, roots, and other plant parts, including, in some cases, what a botanist may call a fruit.

Sweet, fleshy produce is usually regarded as a fruit by chefs and nutritionists. Other botanical fruits that nutritionists and chefs consider vegetables are pumpkins, avocado, green peas, corn, olives, and zucchini (courgettes).

If the Department of Agriculture recommends that people eat two and a half cups of fruit a day, does this include tomatoes?

Or are tomatoes included in the two to four cups of vegetables recommended as part of one’s daily diet?

If you eat a tomato, can you count it as both a fruit and a vegetable, killing two birds with one stone?

Vegetables are generally eaten in savory dishes, while fruit is often served as a dessert. Pretty much no one would be impressed with green bean pudding or bell pepper ice cream. Pumpkin pie is perhaps one of the few examples where what a chef would call a vegetable is served as a dessert.

Fruit is considered to be sweet, fleshy and succulent, and very flavorful when eaten raw. Vegetables seldom have remarkable and distinct flavors like fruit, and while some can be slightly sweet, others are somewhat bitter or salty. Although tomatoes are fleshy and succulent, they are not particularly sweet, and humans tend to use them in savory dishes.

Chefs and nutritionists classify tomatoes as vegetables. Vegetables have a blander taste, rougher texture, and often require cooking. Fruits are softer, sweeter, and can be enjoyed raw. The cancer-fighting benefits of tomatoes are released when they are cooked, and their anti-oxidant powers are boosted.

A Brief Culinary History Of The Tomato

For almost two hundred years, the tomato was much-feared edible in Europe after it was first introduced from the Americas. They called it the “poison apple” or “devil’s fruit”. It didn’t help that the tomato plant was in the same family as the deadly nightshade, the Solanaceae. People also didn’t know how best to prepare it because they had no recipes at first. 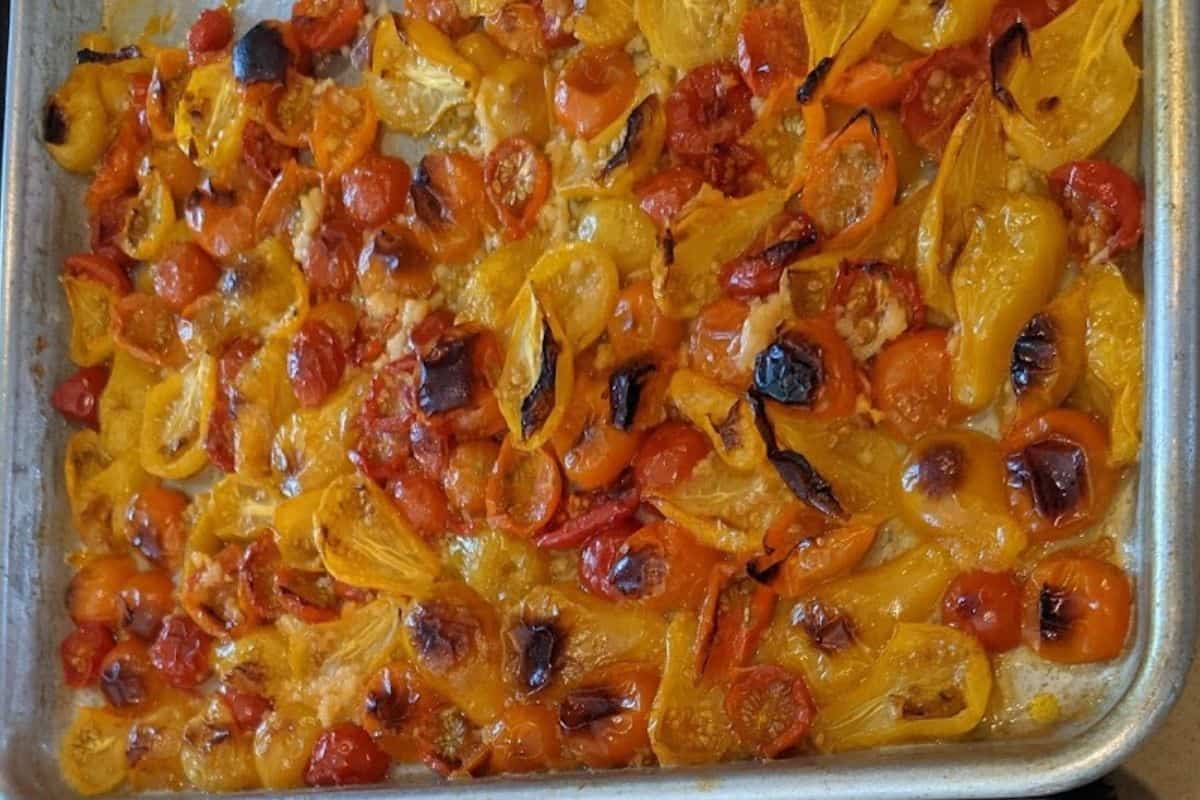 In the end, it turned out that people were getting sick because they were eating off pewter plates that contained lead. At first, tomatoes were only available to the wealthy aristocrats who used this type of tableware, and their high acid content caused the lead to leach from the plate. The aristocrats were getting lead poisoning.

The dieticians of Renaissance Europe classified the tomato as a vegetable and advised against the consumption of vegetables generally because of a belief that they were harmful and sapped vitality.

A fallacy developed around the tomato was that it was poisonous and only good as an ornamental plant. It took a few centuries to discredit this notion. With the Italians’ invention of the pizza in 1880, the tomato grew in popularity and eventually became a central part of their cuisine.

It was only early in the eighteenth century that people discovered when tomatoes were properly prepared, they were a good source of nutrition and aided digestion. From tomato sauce to salad toppings and everything in between, we love tomatoes in our meals and we’ve found a lot of great ways to continue to use them over the years.

Here are a few ways to use tomatoes:

So, you’re probably not rushing to put tomatoes in your fruit salad and it’s easy to see the difference between fruits and vegetables when it comes to culinary uses, regardless of the scientific definition. There are also many varieties of tomato and they can have different levels of sweetness and flavors, based on their type. Technically, a tomato is both a fruit and a vegetable. The answer you get to this question will vary, according to who you ask, however.

At the end of the day, fresh tomatoes are delicious, whether you call them a fruit or a vegetable!

Is Tomato A Fruit Or A Vegetable? – Conclusion

A tomato is both a vegetable and a fruit because it is consumed in savory dishes but consists of a tomato plant’s edible, seed-containing, ripened ovary. When a nutritionist recommends that you eat your vegetables, tomatoes are included in that list. When botanists talk about a tomato plant setting fruit, they are saying it is developing tomatoes.

Did you learn something new from this post about tomatoes? 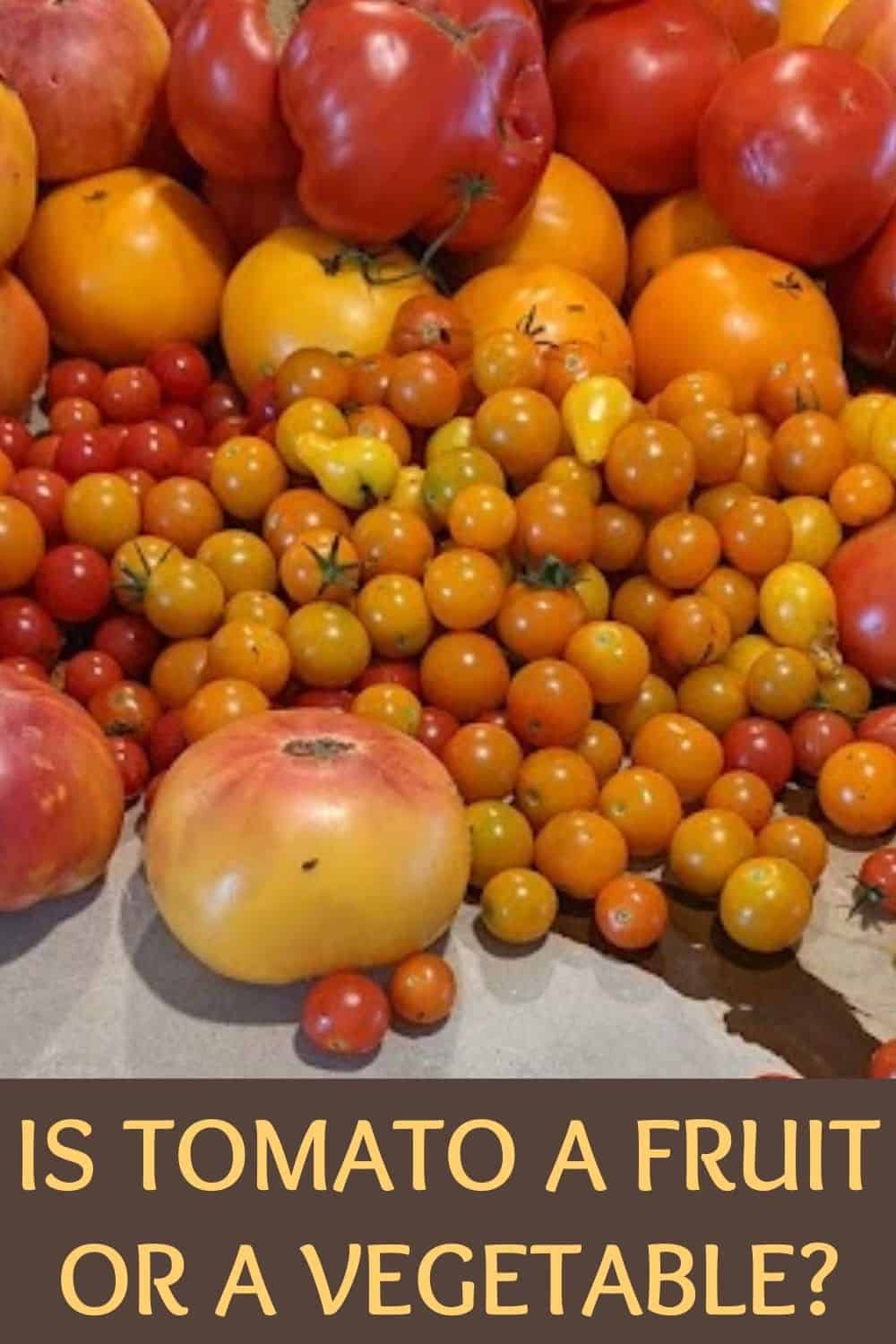 Is Onion A Vegetable Or A Fruit?

[…] that we now know is a “fruit” was the tomato (for more details, read our article called is tomato a fruit or vegetable). Long before there was an educated and scientific answer to this question, a case took place in […]

Is Pumpkin A Fruit Or A Vegetable? Find Out The Truth!