A relatively new breed of chicken that has only appeared on the market in the last several years, Golden Comet Chickens are great egg layers, and they are also friendly and curious. 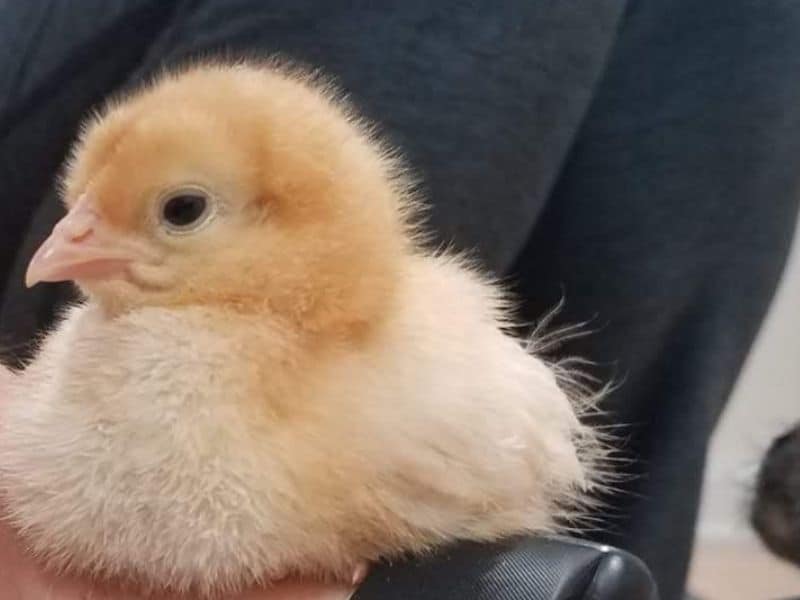 Along with their great personalities and attractive appearances, you will find that they are very prolific egg layers too. These chickens are also known by several other names, such as Cinnamon Queen, Golden Buff, Red Star, or Gold Sex Link.

With their attractive golden-brown feathers, tidy, bright red combs, and alert, inquisitive eyes, Golden Comets will be a great addition to any flock of hens.

History of the golden comet chicken

Originally bred by hatcheries, in an attempt to separate male from female chicks at birth, the Golden Comet was appealing to chicken farmers because they were sex linked as well as being excellent layers.

Hatcheries like chicks that are “sex-linked” because they can tell right at hatching which chicks are male and which are female. The chicken farms that raise hens for egg-laying want no doubts that the chicks that they are pouring expensive feed into are going to be productive egg laying birds.

You may have heard of ISA Brown chickens (very similar looking), but these are a completely different bird from the Golden Comet. Golden Comets are American bred birds with distinctive parentage. ISA Brown chickens are a French bird bred in 1978 from bloodlines that are top secret in the chicken industry. In fact, ISA birds are trademarked. However, anyone can create a Golden Comet chicken with the right rooster and hen.

These chickens are medium-sized birds, with the hens weighing about 4 pounds and the roosters weighing about 6 pounds. These lovely birds have reddish-brown feathers with small touches of white.

The golden comet hens have beautiful, bright red single combs with yellowish-brown beaks and feet. Their bright, cheerful eyes are usually yellowish-orange in color. The males look similar to the females in coloring, but they are generally larger and have much flashier combs and wattles.

Like most chickens, the golden comets can flap around and kind of glide and jump very high, but they cannot fly.

Golden comets are considered a dual-purpose breed. This means that they can be used for meat or eggs. The roosters grow large enough to make a decent meat bird, and the hens can be used for stewing when they get too old to lay eggs. The hens lay plenty of large, medium-brown eggs.

How many eggs do they lay? And how early do they start laying?

Golden Comet hens are very prolific egg layers. They can lay five or even six large brown eggs every single week, making this breed of chickens one of the most prolific brown egg-laying chicken breeds.

Other than during their typical six-week fall and spring molts, young golden comet hens will lay almost daily during their peak productivity.

They will begin laying around 16 weeks of age, which is a fairly young age compared to many other breeds of chicken. They will continue this pace until around 2 or 2 ½ years of age, at which time they may slow down a bit to laying 3 or 4 eggs per week.

The sad part of keeping Golden Comet chickens, however, is that due to their high productivity, the lives of golden comet Chickens are relatively short. It’s not uncommon for these chickens to suddenly die around 3 years old, although, with excellent care, you may be able to extend their lives a bit.

The instinct to brood their own eggs has been bred right out of this chicken breed. This is good if you want reliable egg layers, but if you want a hen to raise chicks from eggs, you will want a different breed of chicken.

How to care for golden comets

Golden Comet chickens are good for almost any climate, but in very cold climates, hen keepers must make sure that their chicken coops are well insulated and have plenty of hay or straw for the hens to use to keep warm. Those who keep Golden Comet hens in colder climates may find the hens choose to sleep in the straw over roosting to try to stay warm.

Check your golden comets daily during very cold weather to make sure that their combs are not freezing. If humidity levels in the coop are too high in cold weather, their combs can get frostbite. You may want to add a small heater to the coop or extra insulation to keep them cozy in cold weather (this one has great reviews and it’s inexpensive).

Other than special care in the cold, Golden Comet chickens’ basic needs are similar to other hens. Simply give them a balanced layer pellet, plenty of water, shade in hot weather, and protection from predators. Providing the chickens a place to dust bathe can prevent lice and mite infestations.

Because Golden Comet chickens are so docile, you may want to keep them separately from more aggressive breeds of chickens. Otherwise, they may end up being picked on by other aggressive hens, or they may not get enough food and water due to their passive natures.

What are their personalities?

Although these chickens were not originally bred by the chicken farmers to be personable, they are, in fact, very calm chickens.

We have 2 of them, and they are super friendly: they’re the first ones to run towards us when we come out, let us pick them up and cuddle, and we can carry them around easily. They are great family pets.

Golden Comet chickens are considered hybrid chickens. A hybrid chicken is one that is not a purebred kind of chicken, with both parents of the same breed. The Golden Comet was created to take advantage of what breeders call “hybrid vigor.” Hybrid vigor is just a fancy way of stating that the cross-bred animals typically are healthier and more vibrant animals.

The offspring of two different kinds of chickens will typically take the best traits of both parent animals and display those traits to their full effect. For instance, a chicken might be a great egg layer but have a low tolerance for cold. Another breed might be less productive from an egg standpoint but have a good tolerance for cold weather. Breeding these two chickens together might create a new kind of chicken that is very productive as well as being cold tolerant.

Golden Comet chickens are created by mating a White Rock breed of hen with a New Hampshire Rooster.

“Sex link” is another fancy breeding term that means simply that the male chicks have different feather colors than the female chicks. For Golden Comet chicks, the males are pale yellow and the females are golden brown with stripes.

Hatcheries and breeders like sex linked chickens because the males and females are easily distinguished right at hatching. Sorting is simplified and hatcheries can charge more for their “guaranteed female” chicks. Customers love buying Golden Comet chickens because there’s no chance that they might accidentally be buying and raising a rooster, something that is forbidden in many towns and cities.

To create your own golden comet chicks, you just need to breed a New Hampshire rooster with a White Rock hen. The unfortunate thing, though, is that the chicks of a golden comet hen and rooster will not be golden comets. These chicks are considered second-generation mixed breed chickens. 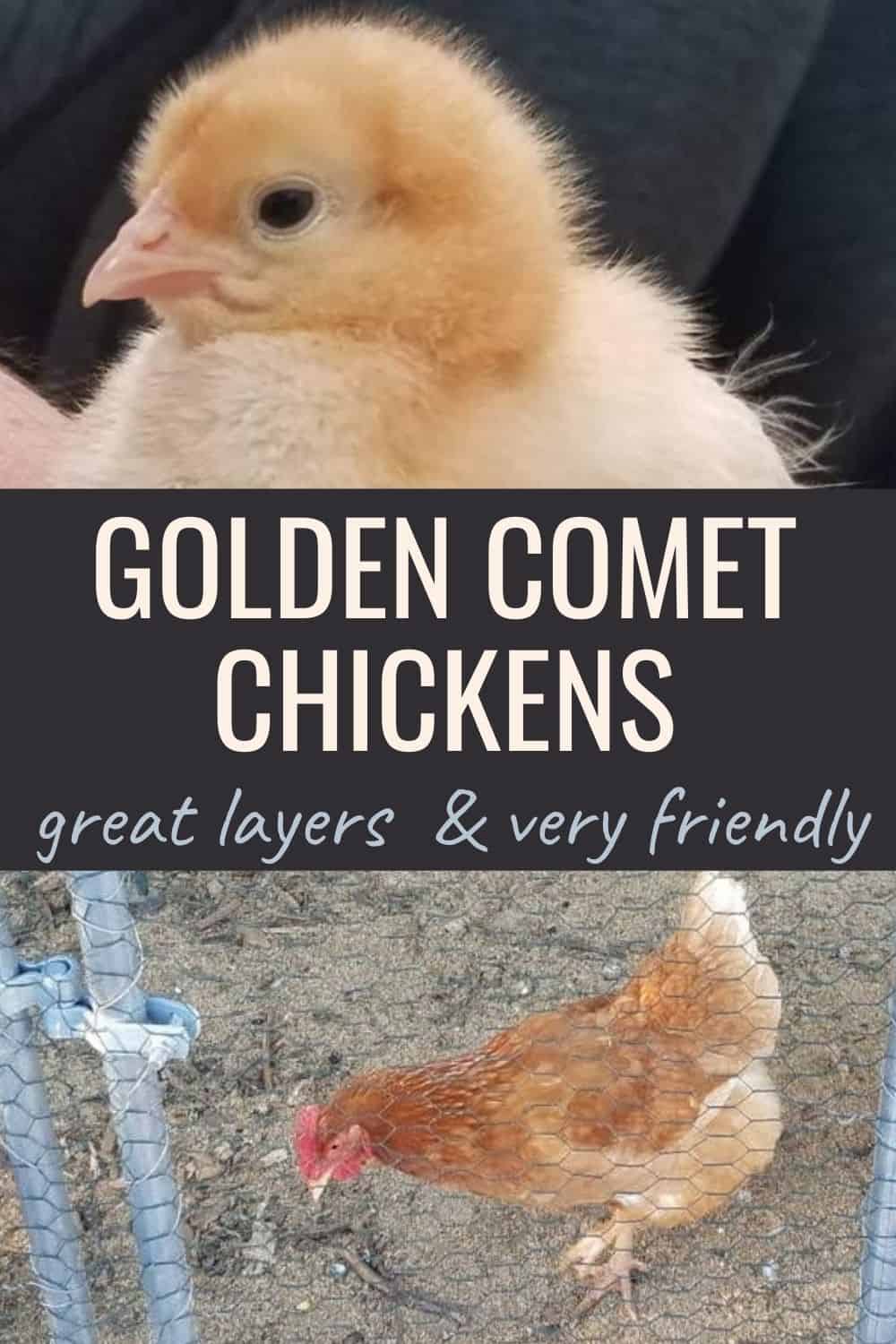 […] Golden Comet Chickens – What You Need to Know Before Getting Yours […]

[…] The emphasis for breeders at that time was a breed of chicken that primarily produced plenty of eggs, but was also acceptable as broilers. The breeders got their wishes. The Black Australorp chicken is an egg-laying machine! If you want more chickens that lay lots of eggs, take a look at the golden comet chickens. […]