With glossy black feathers that reflect the light in a blue and green iridescence and gorgeous red combs, black Australorp chickens are beautiful birds that will make your barnyard welcoming and interesting. They have calm, gentle demeanors and will be an asset to any flock. These birds are champion layers, and they make excellent pet chickens.

How To Raise Black Australorp Chickens

A man named William Cook brought chickens to Australia, and he and other farmers began cross-breeding new kinds of chickens that were more suited to the distinctive climate of this young nation. They started with the classic black Orpington chickens that are typically bred for meat and began crossing them with Rhode Island Reds, Minorcas, Langshans, and Leghorns.

The emphasis for breeders at that time was a breed of chicken that primarily produced plenty of eggs, but was also acceptable as broilers. The breeders got their wishes. The Black Australorp chicken is an egg-laying machine! If you want more chickens that lay lots of eggs, take a look at the golden comet chickens.

In the early 1920s, contests were held in Australia and the top Black Australorp laid between 340 and 360 eggs per year. A hundred years later, the Black Australorp is known as the honorary national bird of the nation of Australia.

The name of the bird was created by combining the words “Australian” and “Orpington” together because the bird was originally called the Australian Orpington.

The appearance of black Australorp chickens

Like its ancestor the Orpington, Black Australorps are fluffy birds with beautiful, red, single, upright combs and wattles. They have deep bodies covered with glossy feathers. In the United States, only black birds are recognized as Australorps, but in Australia, other color varieties are recognized. The shiny feathers of a Black Australorp have a glittering iridescence to them, reflecting blues and greens when the sunlight hits their plumage.

Black Australorps have clean legs and alert black eyes. They grow to be rather large birds, with the males weighing in between 8 and 10 pounds and the hens generally growing to a size between 6 and 8 pounds.

To tell the difference between Black Australorp hens and roosters, you simply need to observe the size of the birds and their plumage. Roosters are much bigger than the hens, and they have long, eye-catching feathers in their tails. They also have more prominent combs and wattles, and they have a more masculine appearance. If you’re still not sure, just step back and wait to see which birds crow!

As chicks, the male and female birds look identical but after 6 to 8 weeks, the males will start standing out for their showier feathers, accentuated combs, and more aggressive personalities.

Black Austrolorps are friendly chickens, but they can be a bit bashful at first until they become more comfortable in a situation. They are not aggressive at all, and even the roosters can learn to come when called and take treats from the hands of their handlers. These birds are very good selections as pet chickens for children since they are very tolerant of being handled and touched.

Black Australorps are calm as well, so if you live in a neighborhood and want a fairly quiet chicken that will not bother the neighbors with excessive squawking, they are a great option. The only time you will hear from the happy Australorps is when they cluck to announce the laying of their eggs.

Because these birds are so calm, however, they might not fare well when housed with other more aggressive breeds. Be sure to keep an eye on a mixed flock to make sure that they get their fair share of food and are not being picked on by more assertive birds.

These chickens do fairly well in confinement, but they can tend toward obesity if they do not have enough space to scratch and peck. They are better suited to a free-range environment, and Australorps are very good at foraging for bugs, grubs, and seeds.

Australorps have a very distinctive carriage, with a habit of “gliding” around the barnyard in an almost regal manner. They are definitely a pleasure to watch from the back porch while they are out scratching in the grass.

Black Australorp chickens are true to their breeding, being very productive layers of large dark brown eggs. In general, this breed of chicken will lay on average 250 eggs a year, which comes out to an average of 5 eggs per week for the small backyard flock. Under commercial conditions with supplemental lighting and a specialized diet, they may lay even more.

While many chickens that lay eggs at the rate that the Black Australorp does are terrible mothers, this trait has not been completely bred out of this breed of chicken. While not all Australorps are good mothers, it is not uncommon for these birds to go broody and raise a clutch of chicks. Most breeders would rate the Black Australorp as a bird with average broodiness.

Black Australorps have historically won prizes for egg-laying, partially due to their early rates of maturity. They grow to adulthood very quickly, with some hens beginning to lay eggs as early as 16 weeks of age. This is an average of 2 months before many other breeds of chickens begin laying.

Black Australorps are primarily an egg-laying chicken, but because of their larger size, they will grow to be a good size for meat. They are indeed considered dual-purpose chickens. If you raise a batch of them and have several roosters, the males, in particular, will make a good carcass for the table. Their growth rate is slower than that of a typical meat bird, but given enough time, you can butcher them for your own use.

Black Australorp chickens: what to know before buying one

Black Australorp chickens need the same level of care that most breeds of chickens need. They need fresh water, shade when it is hot, and a balanced layer pellet.

For shelter, they simply need protection from the elements and from potential predators. They do need shade during hot weather since they seem a bit more likely to experience heat stress than some other breeds of chickens.

The main difference that Black Australorps have in their care is that they need a little extra space due to their larger size. If they have to stay in an enclosed pen and cannot free-range, you will probably want to provide about 8 square feet of space in a pen per bird for these chickens.

They also need about 4 or 5 square feet per bird inside the coop. Additionally, you should provide a few extra places to roost so that every chicken can sleep up off of the ground without being crowded. Ten inches of perching space per bird should be provided for these chickens.

Black Australorps have large single combs, and in very cold weather, the combs can be prone to frostbite. If you live in an area that has harsh winter weather, be sure that your chicken coop is very well insulated. If cold weather occurs for longer periods, you may want to add supplemental heat to the coop to protect their combs. You can also apply a protective layer of petroleum jelly to their combs to help prevent frostbite in cold weather.

No, both hens and roosters are calm and friendly.

Yes. They lay eggs very well but grow to a large enough size to give you a good broiler for the table. Hens are between 6 and 8 pounds and roosters are between 8 and 10 pounds. It may take them up to 6 or 8 months to reach full size.

They are generally considered average in the broodiness department, but when they do hatch chicks they tend to their babies very well.

They can leap up to low branches in trees, but cannot fly the way that song birds can fly.

What kind of eggs do Australorps lay?

Yes! Black Australorp chickens have won egg-laying contests and may lay up to 5 eggs per week. 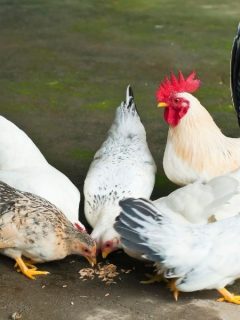 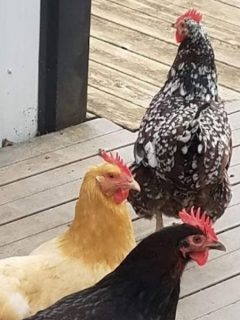