In addition to bringing a bit of cheerful greenery inside, houseplants also offer many other benefits, including purifying the air. While all plants perform this task on some level, choose from the best indoor house plants for clean air to achieve the greatest effect.

In 1989, NASA published a now-famous study suggesting that houseplants can purify the air, removing toxic volatile organic compounds like benzene, formaldehyde, and trichloroethylene. More recent research suggests that beneficial microbes in the soil the plants are potted in play an important role in cleaning the air too.

With the majority of Americans spending most of their time indoors (up to 90 percent!), indoor air quality is important. Many common household products contribute to indoor air pollution, especially aerosols and other sprays, but also new furniture, flooring, and paint. Outdoor pollution can also seep in.

According to Wolverton and the 1989 NASA study, here are 10 of the best indoor houseplants for clean air:

Also known as butterfly palm or yellow palm, the areca palm consistently ranks among the best plants for removing toxins from the air. It also acts as a natural humidifier — a bonus for those of us who feel parched during the dry winter months — and is not toxic to humans, dogs, or cats, making it a great option for pet owners and parents of young children.

Areca palms prefer indirect sunlight and tolerate low-light conditions. As tropical plants, they require significant amounts of water, though make sure the soil surface dries out between waterings. Although slow growers, areca palms can eventually reach a height of about six or seven feet and have a lifespan of up to 10 years.

A multi-stemmed tree, the lady palm can grow to 14 feet if left unchecked, though careful pruning will keep it to a suitable indoor height.

It prefers indirect sunlight, and the soil should be kept constantly moist but not wet, as waterlogged soil will cause root rot. Among the airborne toxins it filters are trichloroethylene, ammonia, and xylene, and toluene. The broadleaf lady palm is safe for dogs and cats.

The unique, glossy rubber plant excels in the removal of formaldehyde, a toxin commonly released by furnishings and building materials.

It grows quickly, reaching a slender height of nine feet in ideal conditions, though pruning will keep it shorter and slightly bushier. Although the rubber plant does not produce striking flowers, its young leaves grow from a colorful, often red, sheath.

Unfortunately, it does have a milky sap that can cause skin irritation or, if swallowed, gastrointestinal issues for both humans and pets. Place in indirect light and water deeply when the top inch of soil dries out.

There are many varieties of dracaena, at least three of which make it onto lists of air-purifying houseplants. I’ve clumped them together here since they are often referred to by their genus (Dracaena), though common names of these three species include corn plant, Janet Craig plant, and dragon tree.

The corn plant and Janet Craig plant have similar appearances with sword-shaped, dark green leaves about two feet long, though corn plants often come in variegated varieties. The leaves of the dragon tree, on the other hand, have reddish or purplish edges and grow at the top of slender canes.

All varieties are easy to care for, tolerating low light and short dry periods. For the happiest plants, water well when the top inch of the soil becomes dry, and keep in indirect light. Dracaena is toxic to dogs and cats.

Though an aggressively invasive garden plant, English ivy makes an excellent low-maintenance houseplant. Allow the vines to trail along a shelf or cascade from a hanging basket.

Variegated varieties should be placed in average to bright indirect light for the best color, though solid green leaves will tolerate darker locations. Keep the soil moist but not wet, as English ivy does not like to be dry. It is toxic to dogs, cats, and humans.

Though one of the most effective air-purifying houseplants, the Boston fern can be a bit tricky to care for. Place your Boston fern in bright indirect sunlight away from drafts and in a location with high humidity, such as a bathroom, or mist it regularly.

Be careful to never overwater it. When the soil feels dry, add room-temperature water until it is damp but not sodden. Over time, a Boston fern can grow to three feet high and six feet wide. Boston ferns are non-toxic to dogs, cats, and humans.

One of the most popular houseplants, the peace lily is also fairly unique in that it is one of the few plants that commonly blooms indoors. It has proven to be especially effective in removing airborne alcohols, acetone, trichloroethylene, benzene, and formaldehyde.

Although peace lilies tolerate darker locations, bright indirect light will encourage the growth of tall, white flowers. The plant will tell you when it needs to be watered — when the leaves begin to droop, water thoroughly, being careful to discard any water left standing in the saucer. Size depends on the variety, though most will grow to a maximum of 18 inches tall and wide. Peace lilies are mildly toxic to dogs, cats, and humans.

In addition to being one of the most popular houseplants, golden pothos also ranks among the easiest to care for.

It will hold onto its variegation even in poor light and can tolerate erratic watering better than many other plants. Avoid direct sunlight and overwatering; a good weekly soaking is usually sufficient.

Like ivy, golden pothos is a creeping, trailing plant perfect for hanging baskets or the top of tall bookshelves. The growing speed depends on the variety and light conditions, and the vines will get pretty long unless pruned back — place cuttings (stripped of all but the top few leaves) in moist potting soil to easily propagate new plants! Pruning will also encourage new growth for a fuller, healthier-looking plant.

Golden pothos is mildly toxic to humans, dogs, and cats.

Another easy-to-grow houseplant, the snake plant has tall, spiky leaves that contrast nicely with the tumbling form of golden pothos.

Snake plants prefer bright light with at least some direct sun, though they will tolerate lower light conditions. Water moderately throughout the warmer months but less in the winter. Depending on the specific variety, they can grow as tall as three to five feet, though they do grow slowly, especially in poor light.

Snake plants do contain irritating saponins that can cause gastrointestinal issues in cats, dogs, and humans.

A common garden plant, chrysanthemums can also be bought as a compact houseplant, known as a pot or florist’s mum. They filter at least five different air pollutants but are typically discarded after their six- to eight-week flowering period, due to the difficulty in getting them to bloom again.

The easiest way to encourage another batch of showy flowers is to plant the chrysanthemum outdoors once it finishes blooming, as long as you avoid putting them out in cold winter conditions.

Chrysanthemums require bright light and frequent watering, so place your plant in a sunny spot and keep the soil moist. They don’t grow much as a houseplant, typically retaining the size at which they are bought, about 12 inches.

Unfortunately, chrysanthemums are toxic to humans and most pets.

Can houseplants really clean the air?

This has become a much-disputed question in recent years, and it really comes down to this: houseplants do remove airborne toxins, but their effectiveness as air filters is inconclusive, mostly due to the amount of air circulation in most homes. In many modern homes, the air completely turns over about once every hour, giving any houseplants little time to clean the air before it swaps with air from outside.

However, Dr. Bill Wolverton still advocates for houseplants as a viable means to filter air pollutants, especially when paired with an air filter or a special Plant Air Purifier planter. And whether or not plants do effectively work as air filters, other studies have shown that houseplants help alleviate stress and make us feel happier.

How do plants purify the air?

How many plants do you need to purify a room?

Wolverton recommends two or more good-sized houseplants for every 100 square feet (assuming average ceiling height). However, Michael Waring, co-author of a recent houseplant study, suggests that with the amount of air circulation in the average home, you might need as many as 10 plants in each square foot to make a noticeable difference. That’s a lot of plants!

Which plants are safe for pets and children?

From the list above, the following plants are nontoxic and thus safe to have around children, cats, and dogs:

Others are only mildly toxic, causing irritation, but not severe reactions (see the main list for details). The ASPCA has a searchable database on its website where you can look up the toxicity of more than 1,000 plants for dogs, cats, and horses.

Add some greenery and breathe freely

Whether or not houseplants effectively clean the air in our homes and workplaces, they certainly add a bit of cheer to a room and may even help us feel less stressed during long days spent indoors. Set a new plant on the windowsill or in that lonely corner and take a deep, appreciative breath. 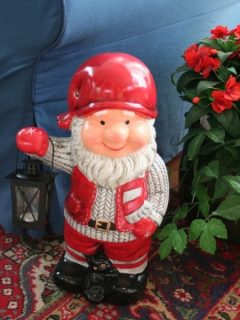 Next
Cute Christmas Gnomes for a Whimsical Holiday
Click here to cancel reply.