Blister beetles hurt not only your plants but also your skin, and they can even harm livestock! Learn how to get rid of blister beetles in the garden to protect your crops, animals, and self. 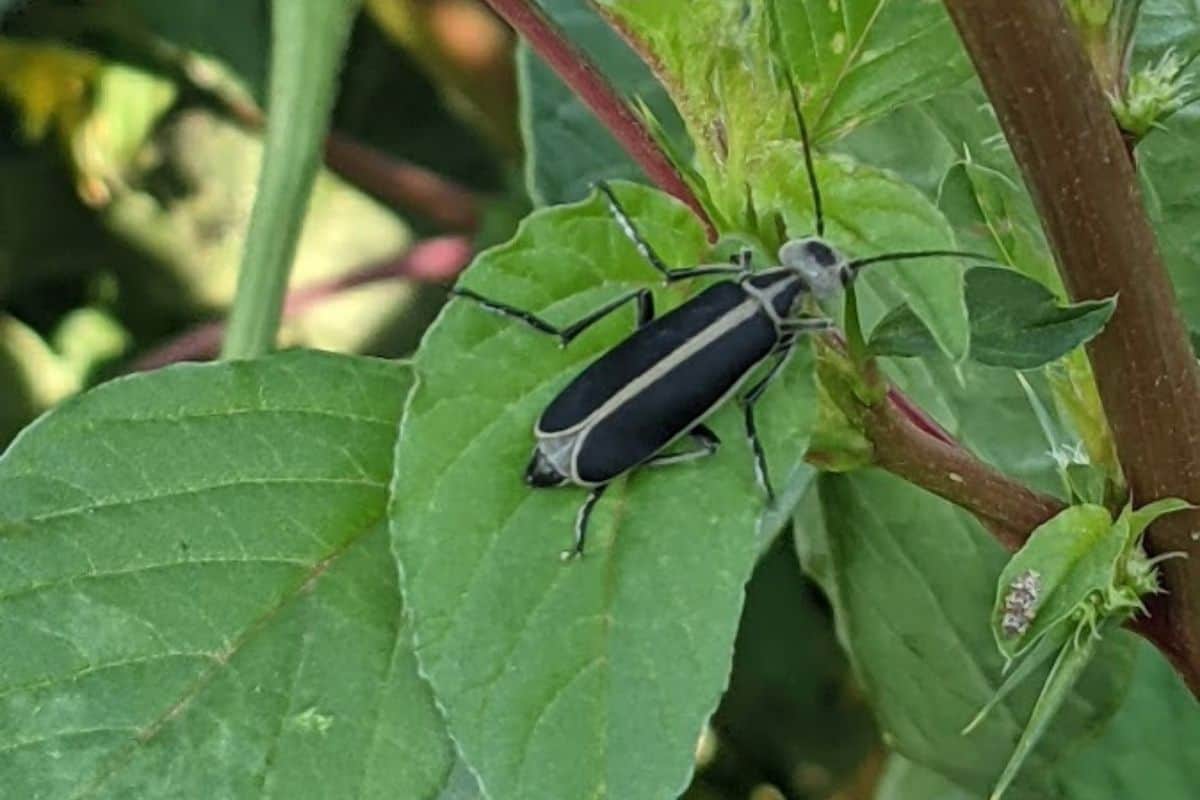 How to Get Rid of Blister Beetles in the Garden

How to identify blister beetles 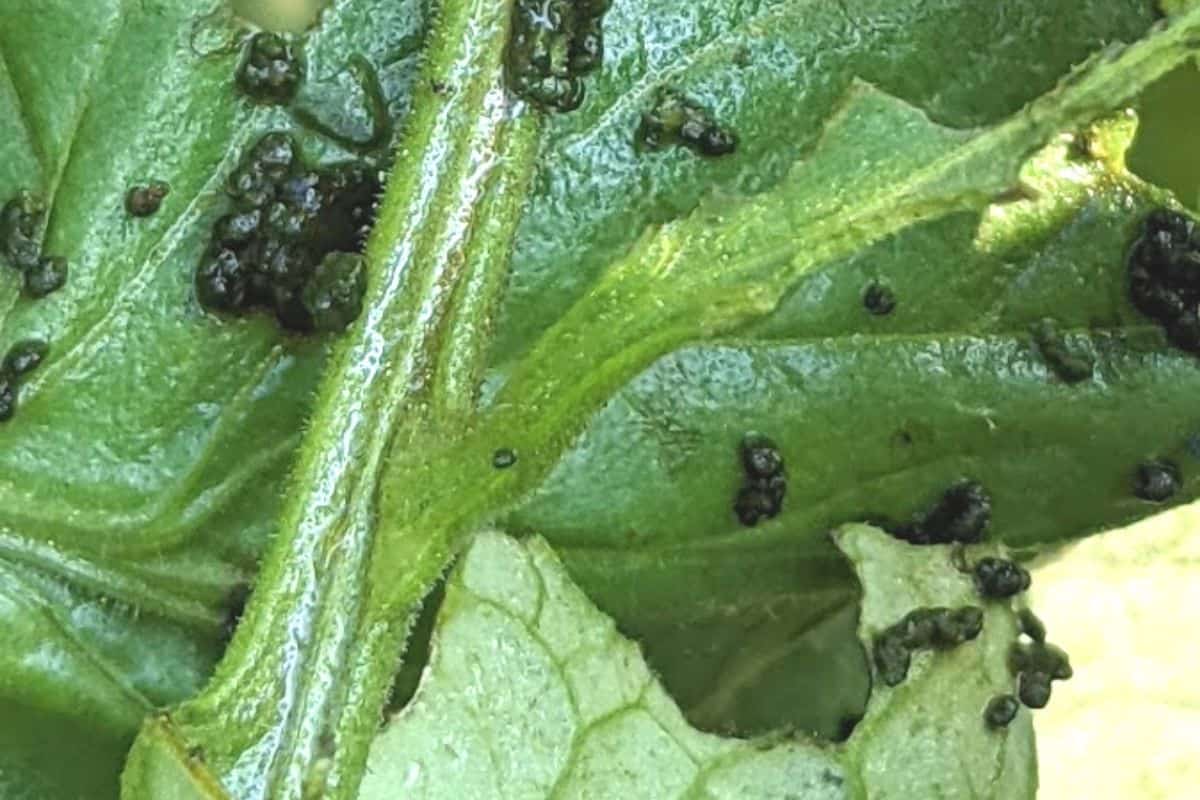 Blister beetle droppings on a tomato plant – the first thing we noticed, and at a closer look we found the blister beetles

Blister beetles have long, narrow bodies and rectangular heads with beaded, threadlike antennae. They have two sets of wings folded along their back, with the top pair being soft and flexible, unlike the hard top wings of most beetles. Coloring varies by species, including black, gray, orange, and striped. 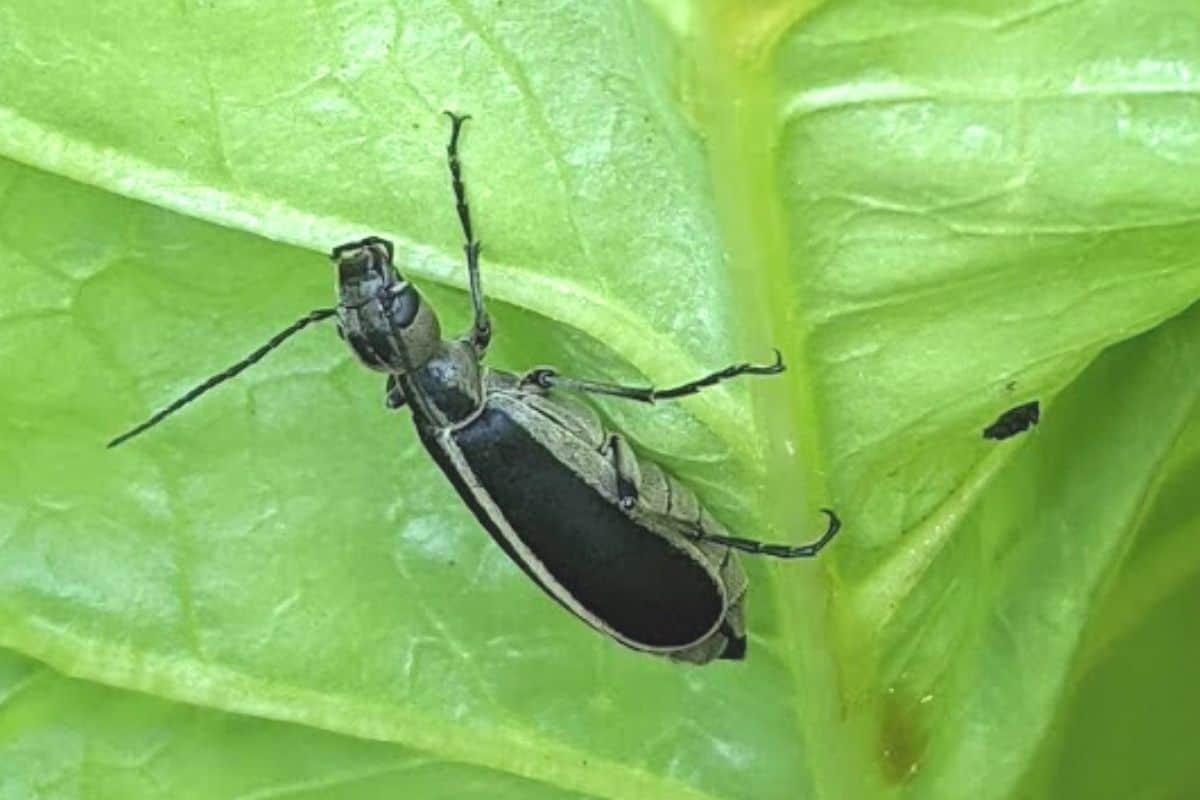 A blister beetle on the underside of a Swiss chard leaf

Blister beetles often travel and feed in groups, sometimes causing significant defoliation to the plants on which they congregate. When disturbed, blister beetles tend to drop to the ground.

Another defense mechanism, which gives blister beetles their name, is the ability to release an odorless chemical called cantharidin when squished or aggressively handled. Cantharidin is toxic, causing blisters when it comes into contact with skin. If swallowed by either humans or animals, blister beetles can cause dehydration, blisters, hematemesis, or even renal failure. They sometimes end up in bales of alfalfa hay, and the consumption of as few as five by a horse can be fatal. 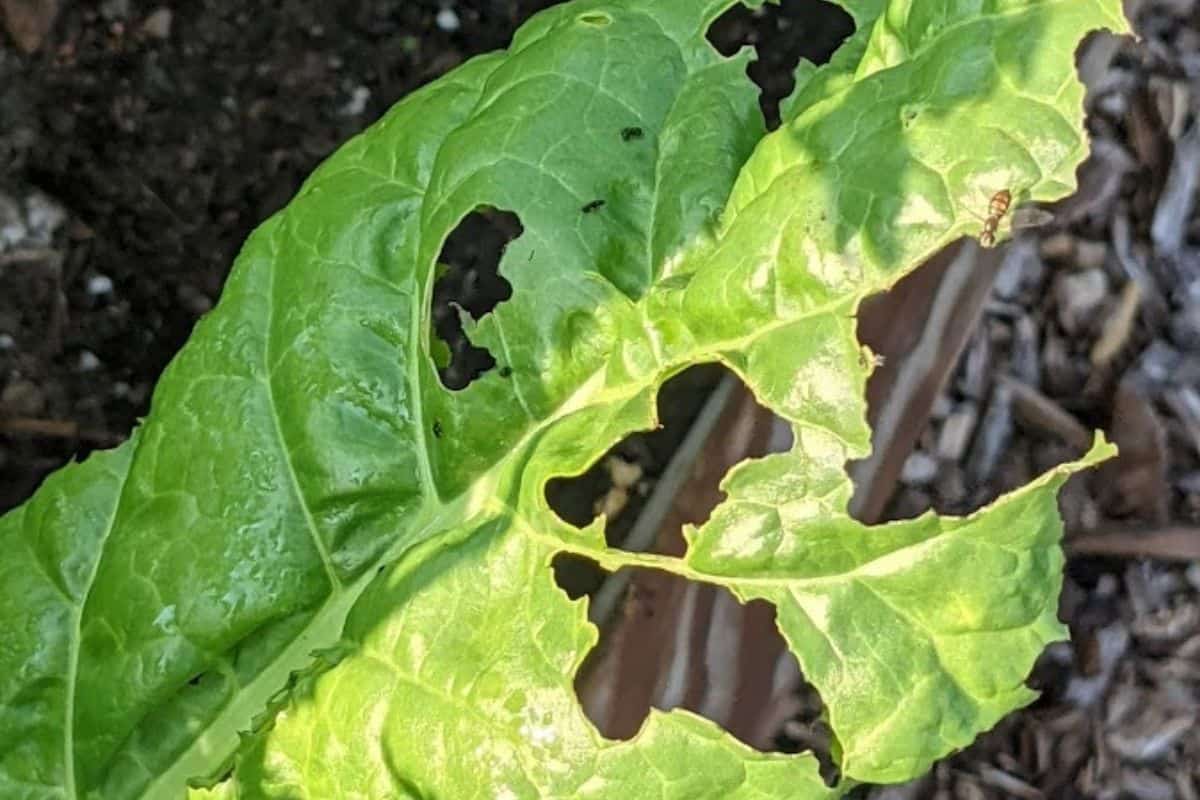 Not particularly picky eaters, blister beetles feed on the leaves as well as flowers, including pollen and nectar, of a wide range of plants. Some favorites include alfalfa, beets, potatoes, and tomatoes, though they also feed on other members of the following families:

Look for skeletal leaves and damaged flowers, with significant defoliation where large groups of blister beetles are present.

How To Control Blister Beetles 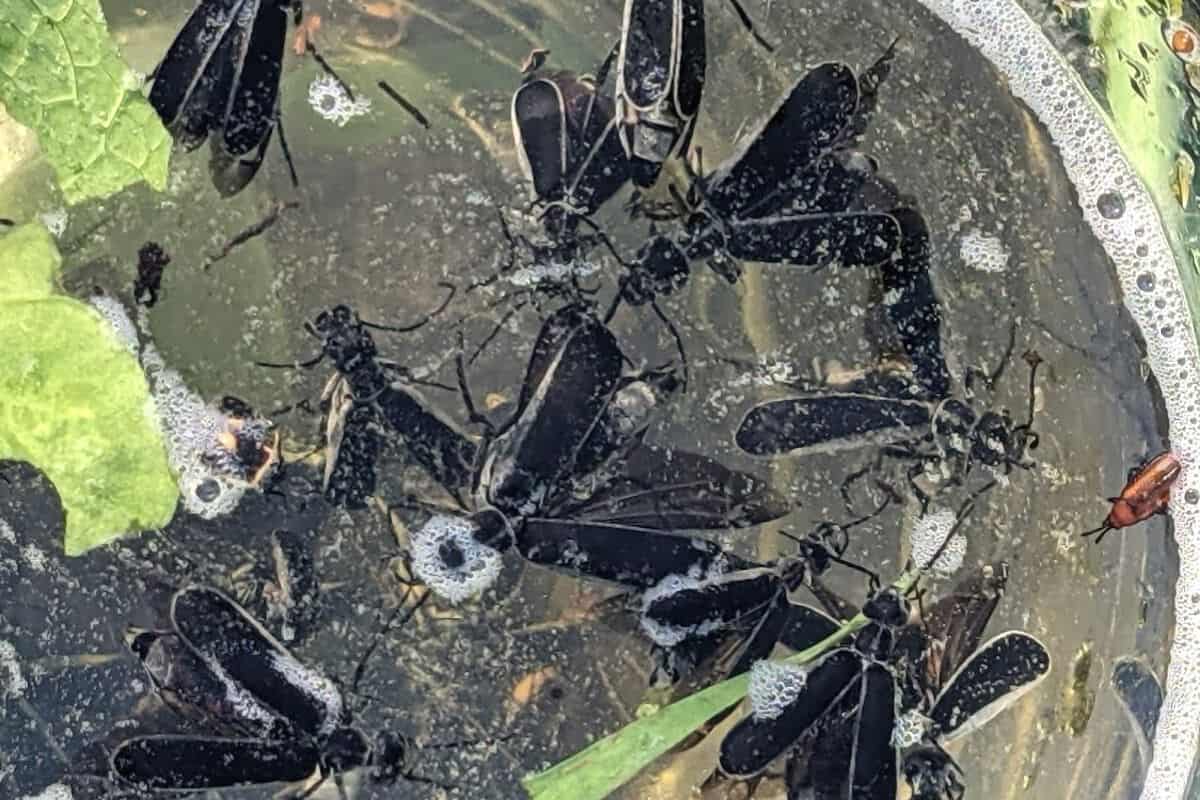 In smaller gardens, picking blister beetles by hand is often one of the most effective methods for control. Wear gloves to protect your skin from the blister-causing cantharidin, and be careful not to squeeze or otherwise crush the beetles. Instead, drop them into a container of soapy water.

With insects like blister beetles that have the habit of dropping off plants before you can grab them, I find it can be helpful to simply hold the container under the plant and shoo the pests into it. Plan to pick blister beetles once or twice a day; the sooner you notice them and more often you pick them, the quicker and better your results will be.

Birds love munching on beetles. To encourage them to help in your effort to rid the garden of blister beetles, add a few simple but enticing features. A birdbath will add charm as well as attract birds, as will sunflowers, cone flowers, and other colorful and nutritious blooms.

When enlisting the help of birds in pest control, do not use any chemical applications that might deter or even harm your feathered friends.

In addition to your vegetable crops, blister beetles also really like weeds. Ironweed, pigweed, and ragweed are particular favorites, so give some special attention to those specific plants when weeding your garden. Keeping weeds to a minimum in general tends to discourage pests by removing a potential source of cover and food, so you might find that this tactic reduces other pest populations as well.

In contrast to pulling weeds favored by blister beetles, you can also leave a patch to serve as a trap crop. Pigweed, a favorite food source, is perhaps the best plant to use. Allow this weed to remain in the garden, and perhaps even encourage a patch of it to grow, to distract blister beetles from your crops.

While using trap crops is an effective method, keep in mind that if the beetles run out of pigweed, they will likely return to your vegetables and flowers. Handpicking blister beetles from the trap crop or simply flame-weeding the beetle-infested pigweed can help prevent this by reducing the blister beetle population.

Row covers prevent many insect pests from landing on your plants in the first place. As soon as you get your plants in the ground, cover them with an insect-excluding row cover. Keep an eye on plant development, though, and make sure to remove the row cover when flowers begin to emerge to allow pollinators to reach them. By this point, the blister beetles have likely moved on to another location.

I always recommend insecticide as a last resort and encourage the use of OMRI-certified organic products. This is to protect you and your family (including pets!) as well as the beneficial wildlife around your garden and the natural environment in general. Effective natural insecticides for blister beetles include diatomaceous earth, spinosad, and neem oil.

8. Use a natural repellent

As with insecticides, look for OMRI certification when considering insect repellents for the garden. Diatomaceous earth does double duty as an insecticide and repellent, killing present beetles and discouraging any that approach in the future. It works in pots and raised beds as well as in-ground gardens.

Another natural powder, oyster lime shell discourages egg-laying and repels blister beetles in general. It, too, can be used in containers and raised beds. Plus, not only is oyster lime shell not harmful, but it actually is beneficial to the soil, adding calcium and other nutrients and raising the pH of acidic soil.

If you have blister beetles in your garden, you’ll want to take action to remove them not only to save your plants from defoliation, but also to prevent blisters and more serious harm to yourself, your family, and your animals.

As you may have noticed reading the above list of ways to get rid of blister beetles, some control methods complement each other and even  overlap. If one method doesn’t seem to work well in your situation, try another, or even several in combination.

May your pests be few, and happy gardening! 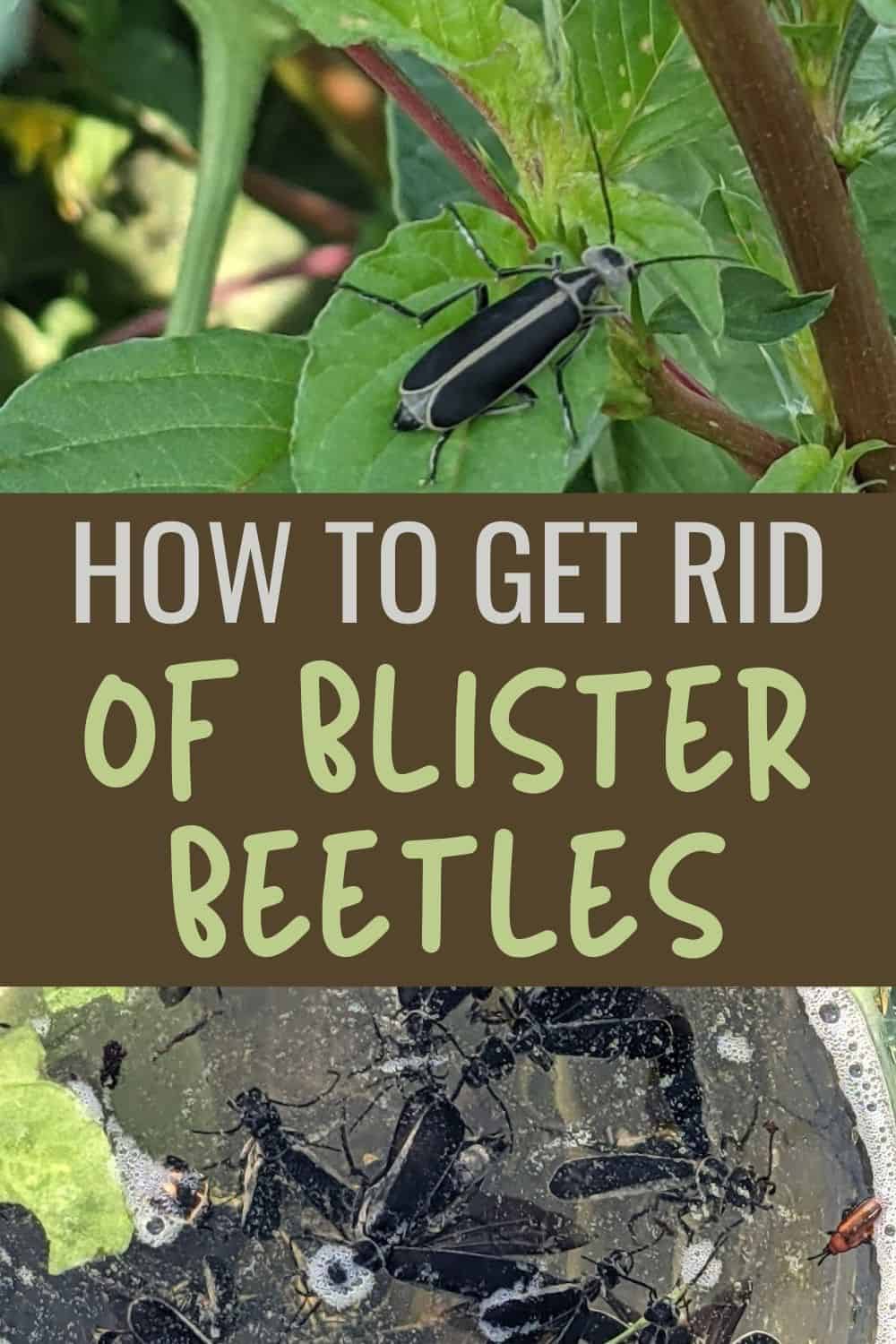