The black eyed Susan vine, or Thunbergia alata, is a pretty climbing plant. It grows well in any south, east, or west facing window. It’s perfect for the veranda or porch and will also thrive on a sheltered balcony. 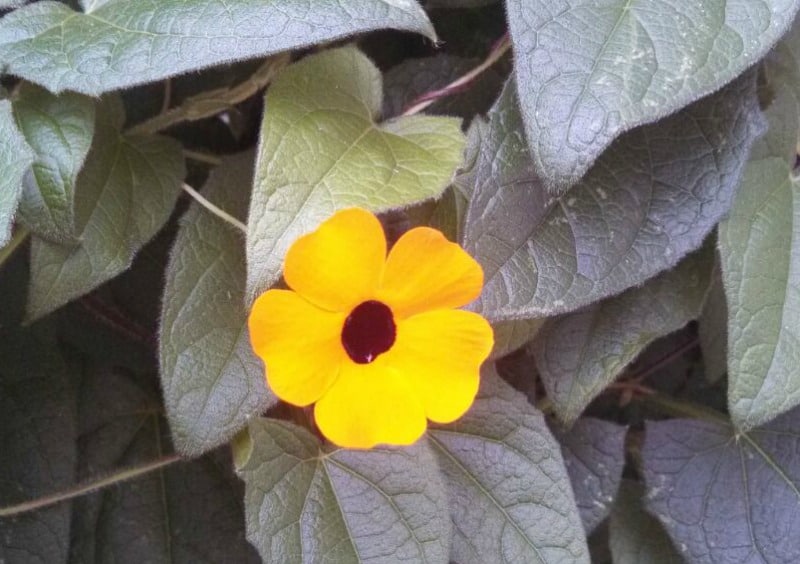 Discovered in South Africa in 1823, this profusely flowering climber was named for Linnaeus’ apprentice, the botanist Peter Thunberg, 1743-1828.

How To Grow A Gorgeous Black Eyed Susan Vine 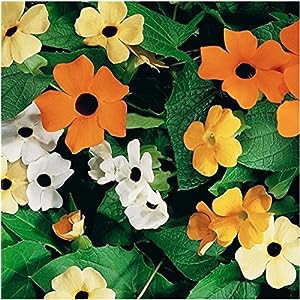 Buy seed in April or May.

Use commercial propagating compost or mix ¼ sand and ¾ moss. Sow the seeds thinly in airy soil in a tray and cover them with a thin layer of soil or press them lightly into the soil.

Cover the tray with glass or plastic to retain the moisture. The germinating seeds can’t take drought; no seedling can.

Once Thunbergia opens out in late June or early July, it continues all summer long, right into the fall.

The funnel-shaped flowers are mostly orange with a black eye at the center but can also be white or clear yellow. Sometimes the eye is the same color as the rest of the flower.

Black eyed Susan is grown as an annual

Many people consider Thunbergia  to be an annual, but it can over-winter and flower again the following season. It needs a bright, yet cool spot for the winter where it can rest with little water and no food.

The elegant vines with their heart-shaped leaves need some kind of support. It is often sufficient to run a wire along the window.

A light, attractive trellis is even better. Or, why not let Thunbergia hang free from a basket? It can be a very decorative green cushion filled with yellow or orange black-eyed blooms.

Thunbergia can become too compact and full of tendrils, which makes it an easy prey for damaging insects. Thin the plant out if this happens to let in more light and air.

If plants develop mildew, reduce watering, and move them to a drier location.

White-fly like thin-leafed plants such as Black-Eyed Susan. If small flies take to the air when the plant is touched, spray the plant from below, under the leaves, several times to make life uncomfortable for them. If this isn’t enough, resort to chemicals. Just make sure to spray from a distance, or the leaves will be damaged by the spray.

Aphids can also be a problem. Spray with soapy water or use insecticide.

Poor flowering is the result of insufficient light. Move the plant to a brighter spot. Starvation has the same effect. Perhaps the plant has not been fed recently. Feed more frequently in future. Thunbergia likes regular applications of diluted liquid plant food from spring to fall.

As you can see, the black eyed Susan vine is an easy plant to grow if given plenty of food and water. It puts on quite a show too! I love mine, and plant it every year by my front door (it’s an annual in my zone). 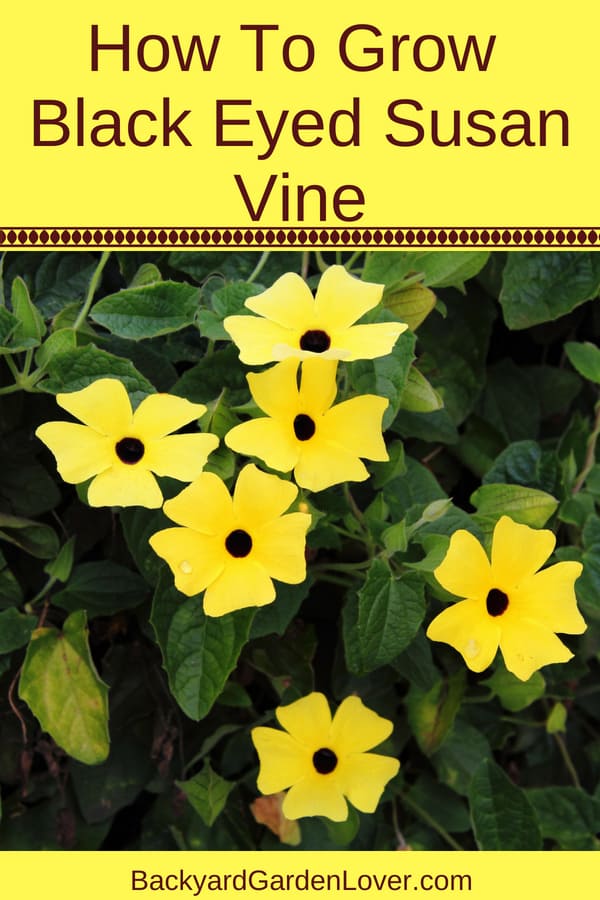 […] the idea of a screen, a trellis will help hide a utility box, with the added benefit of supporting a beautiful vine. Choose a decorative trellis that will be attractive and concealing even in the winter months, when […]

can seeds be collected from this plant? If so, where are the seeds?

Yes, you can. Here's a goof guide about the process: http://mrbrownthumb.blogspot.com/2010/07/how-to-collect-black-eyed-susan-vine.html

[…] Here’s one of my favorite mums on my front porch intertwined with a black-eyed Susan vine flower. […]