Hummingbirds are one of the most fascinating and beautiful creatures on earth. They fly from flower to flower collecting nectar, pollinating plants and trees in their path. They can hover for up to 30 seconds at a time while they feed! These tiny birds love tube-shaped flowers that are brightly colored. Today we’ll look at the top ten purple flowers that attract hummingbirds to your garden this year. 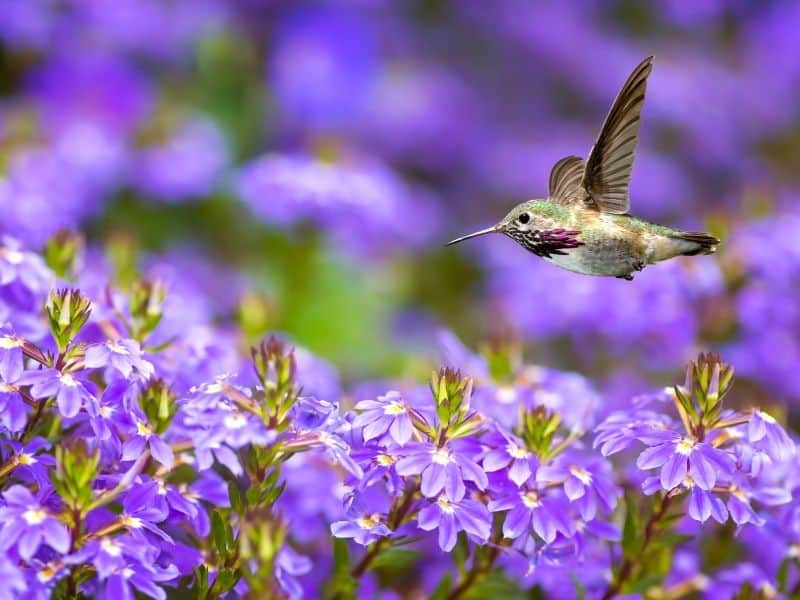 Though hummingbirds are commonly known to be attracted to red flowers, listed below are 10 purple flowers hummingbirds will visit due to their shape and the abundant nectar they produce rather than by their color. Incorporate a few into your garden for some variety and watch the hummers come by! 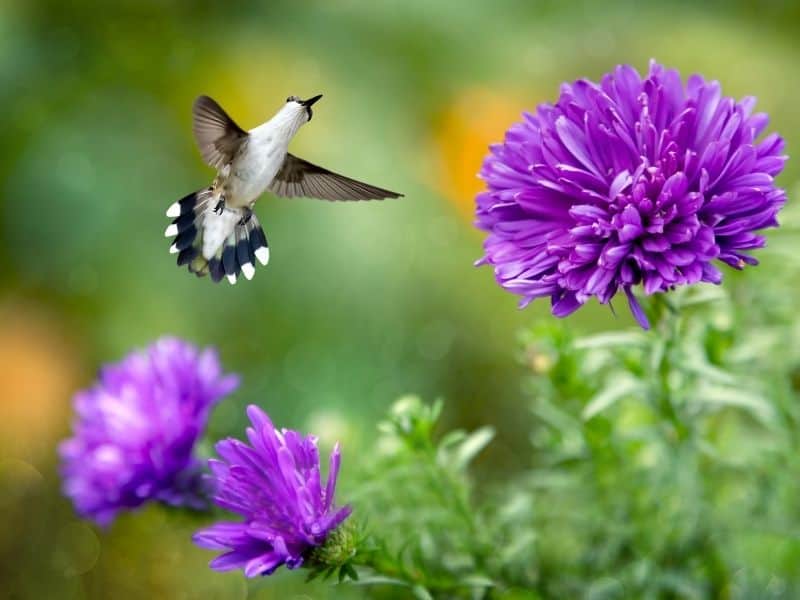 Also known as Bee Balm or by its scientific name of Monarda, Bergamot is a showy, fragrant perennial that also belongs to the mint family of Lamiaceae. This flower is a great option for any hummingbird garden as it is very versatile in various growing environments as it can survive in full sun, partial shade, and a wide range of soils. Plus, Bee balm blooms all summer long with colors running from purple to lavender, and very rarely, white. However, as more cultivar versions are made, the color spectrum of this hardy native plant has grown. 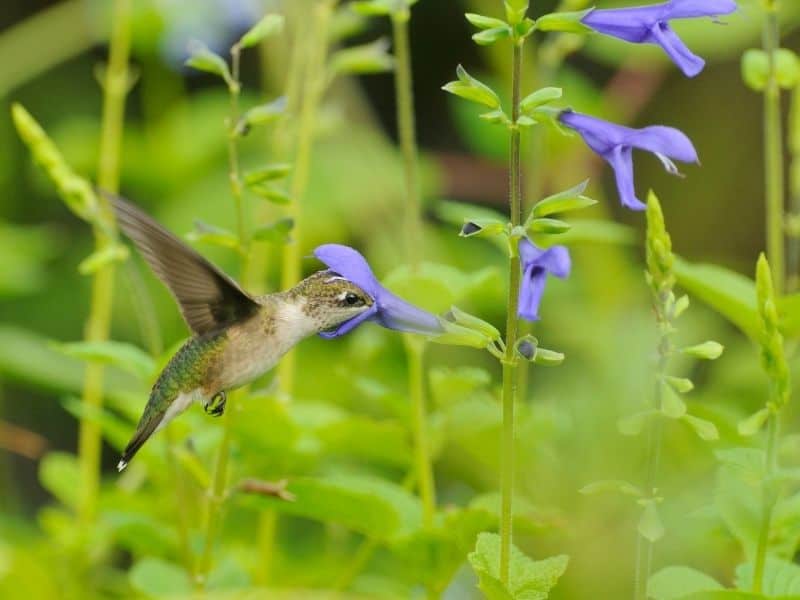 Like Monarda, Common Sage is also a member of the mint family Lamiaceae. This herbaceous perennial grows best in full sunlight and well-drained soil and displays tall blueish spikes containing 2 lips that strictly bloom throughout the month of June.

Some maintenance may be required to keep Salvia officinalis stout and compact, by pruning in the spring as well as through the summer, and by doing so, Common Sage produces a bolder flavor to be used within the kitchen.

Overall, this fragrant perennial mixes well in all types of gardens including vegetable, cottage, and herb with their contrasting gray leaves, making it a great option to include in any hummingbird garden. 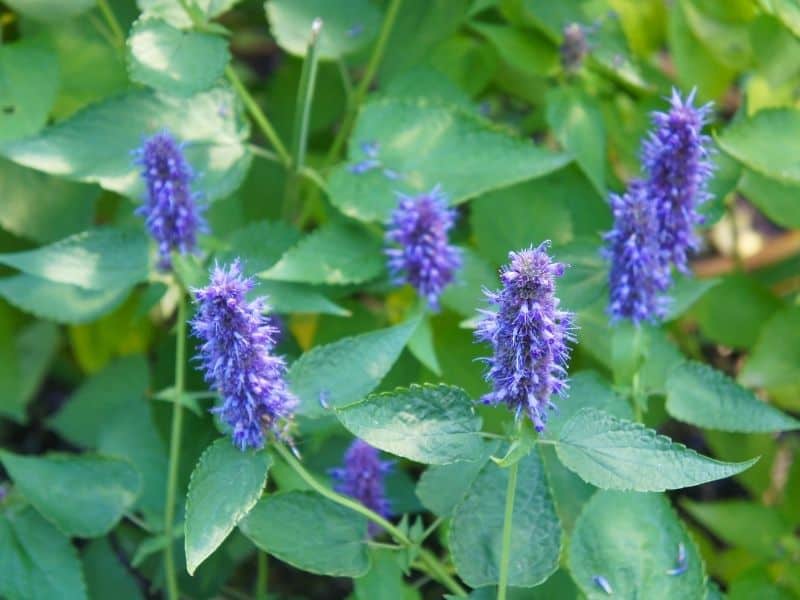 Also known as Hummingbird Mint, Agastache, is a fragrant flower with a long bloom time of June through September. These perennials grow well in sunny locations with good drainage and are usually deer and rabbit resistant.

Hyssop produces 2-lipped tubular purple flowers in terminal spikes, containing lots of nectar, which easily attracts hummingbirds as well as bees and butterflies. Plus, an easy way to promote more blooms for hummers is to deadhead heads as they expire, or cut off a few early for an indoor fresh cut or dried arrangement. 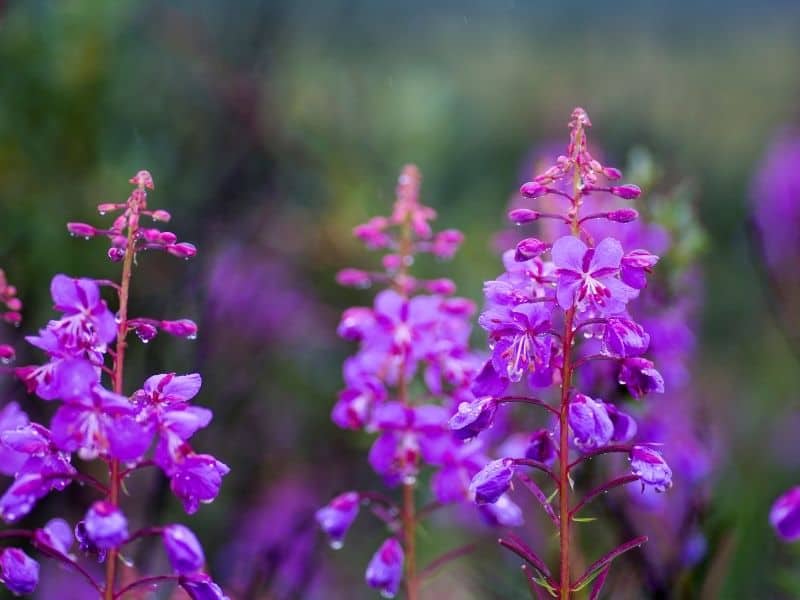 This hardy perennial obtained its name based on its ability to colonize areas burned by fires rather than by looks. This tall, showy flower prefers moist soil and grows in dense patches with a long blooming period of June through September.

Each plant spike displays up to 50 pink to purple flowers, producing up to 80,000 seeds. Overall, this beautiful flower is a great addition to any home garden; however, if left unchecked, this plant can take over a garden.

As its native habitat continues to decrease and fire suppression increases, Wild Lupine can be considered an uncommon native plant in some areas of eastern North America. Its tall, erect spikes display pea-like flowers that range in various shades of purple that bloom in late Spring. This small plant also contains palmate green leaves, which add to its attraction.

Lupinus perennis can be grown in light shade, is tolerant of poor soils (and assists in replenishing nitrogen back into the soil), and attracts butterflies as well as hummingbirds. As the bloom time for Lupine ends in early summer, make sure to plant summer or late fall blooms nearby in your flower beds. 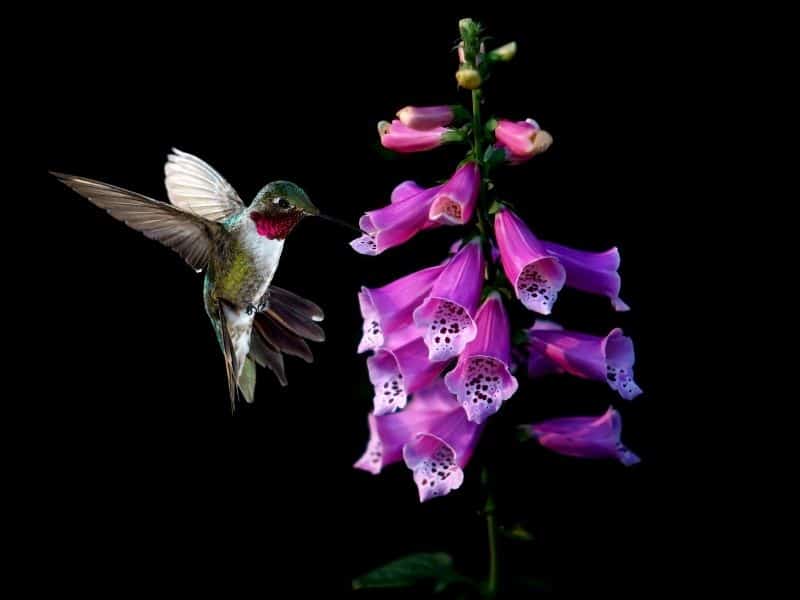 Digitalis purpurea is a showy, biennial, or short-lived perennial that can easily be grown in average soil throughout gardens partial shade with moist soil. Small, tubular, purple flowers bloom on one side of the 3-4’ stalk from May through June, though most cultivars contain flowers around the entire stem.

The long bell-shaped petals serve as an invitation to hummingbirds, containing the food source of nectar towards the bottom. The long petals also act as a landing pad for other pollinators, including bumblebees.

Foxglove plants can add a bold dimension to any summer garden, shady areas, or be used as an edging plant to make it stand out more. Mass plantings can be very effective with this self-seeding perennial; plus, deer and rabbits tend to stay away.

Though considered low maintenance, this plant may need to be deadheaded to encourage a second bloom while cutting the stalks to the base of the plant makes the biennial act like a perennial. Finally, as a single plant produces over 1million seeds, deadheading before the plant goes to seed may be wise, leaving only a few seeds to continue the generation. 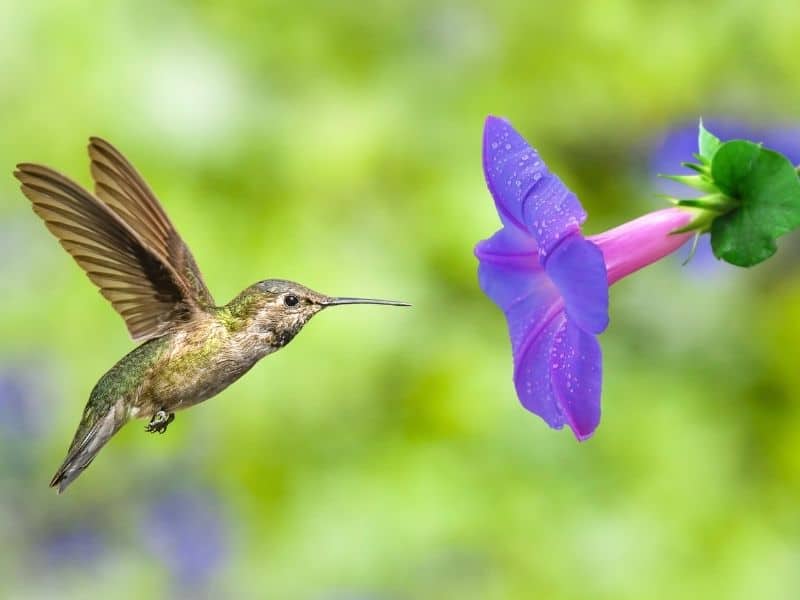 Morning glory is an annual plant that blooms from early summer till the first frost in the fall. Their fragrant, trumpet-shaped flowers can display a wide variety of different colors including pink, purple, blue, and white. Ipomoea purpurea can also be taught to climb walls and fences or serve as a dense groundcover because of its capabilities to grow quickly – up to 10 feet each growing season.

Optimal growing conditions for this climbing plant include a sunny area, fertile soil, and shelter from strong winds. Though also considered a low-maintenance plant, some pruning may be required before the plant seeds out, in order to prevent any unwanted self-seeding.

Overall, this is a perfect choice for a hummingbird garden containing a fence, pergola, or trellis, just make sure the area is large enough for a mature Morning Glory vine. 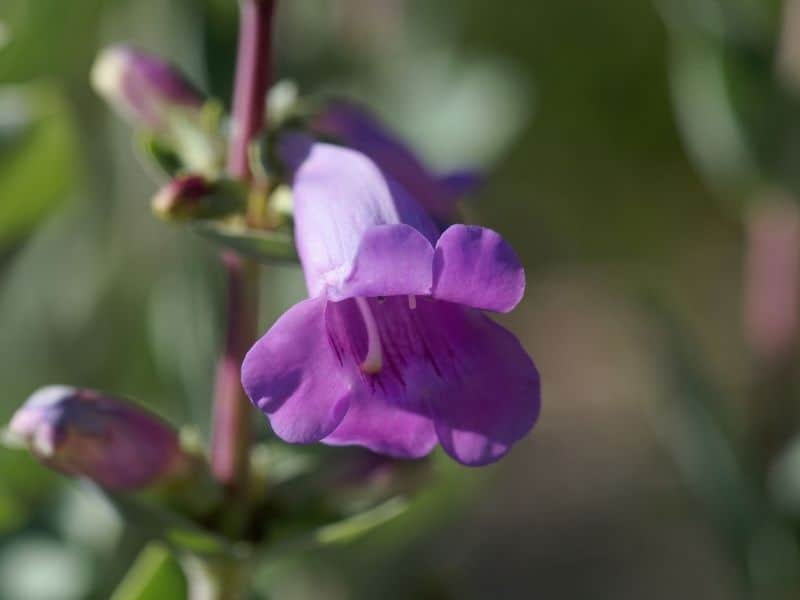 Despite blooming for only a couple of weeks, Penstemon grandiflorus makes up for the lost time being one of the showiest native perennials throughout its short blooming season occurring in May and June. With heights reaching up to 3 feet tall, its delicate, tubular flowers display stunning lavender-pink colors, easily attracting long-tongued pollinators.

This perennial’s foliage also gives off a silvery green-blue hue, allowing it to contrast beautifully within any hummingbird garden. Large Beard Tongues grow well in sunny areas with some light shade, can tolerate poor soils, and is also drought tolerant.

Regardless of being a hardy native plant, Penstemon grandiflorus is considered endangered in many states and is uncommon to even see in the wild. Thus, incorporating it into any summer garden can easily make it unique, and one hummingbird, butterflies, and bees cannot get enough of it. 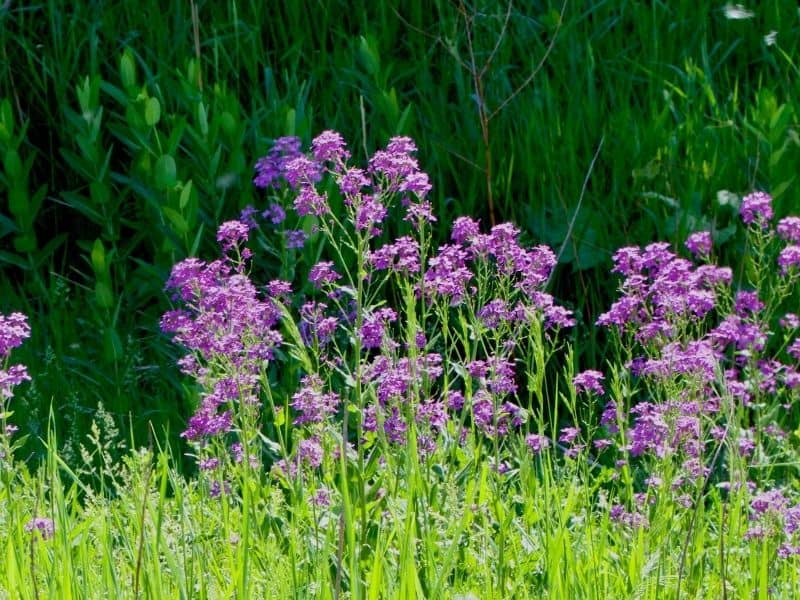 Phlox pilosa is a small-sized native perennial, only reaching up to 18 inches high, with late spring to mid-summer bloom of fragrant pink or purple flowers. Cultivars of Phlox have extended the color spectrum though and can include blue, yellow, and red varieties. Phlox’s long corolla tube containing a rich food source of nectar is the main reason this little plant is visited by many pollinators including hummingbirds.

Not super picky on where it grows, Prairie phlox can develop easily in full sun, fertile, moderately dry to moist, well-drained soils, is drought and clay tolerant, and is deer resistant. Because of these qualities, phlox is a great flower to include in rock, cottage, or wild gardens as well as prairies or meadows. Plus, with its ability to spread through its rhizome root system, Prairie phlox can form dense, colorful clumps in any garden if allowed. 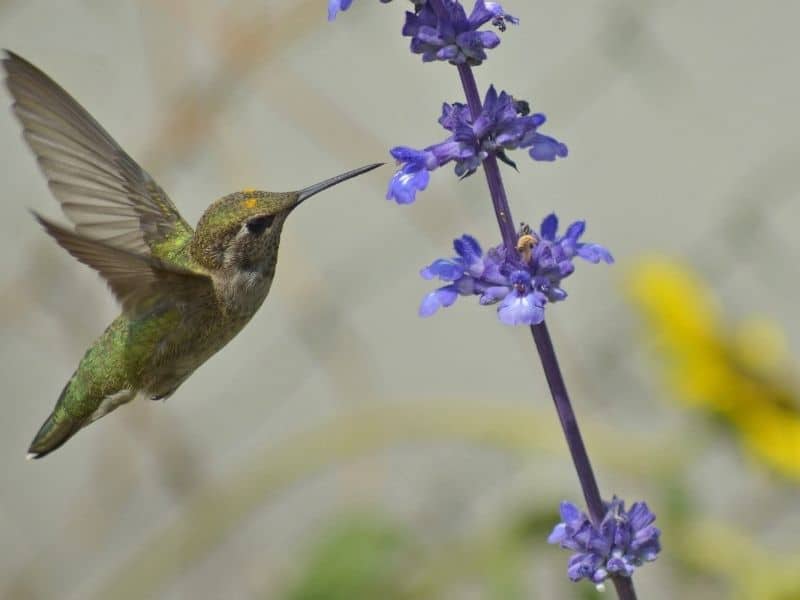 A relative to the well-known hummingbird magnet, “Hot Lips”, this purple variety is another perennial belonging to the mint family whose leaves give off the tell-tale minty scent.

Though a perennial, this Salvia relative may need some extra protection throughout the winter depending on the area’s hardiness zone and a light pruning in the early Spring but is otherwise a low maintenance, beautiful flower. Amethyst Lips bloom in the early summer months to fall, prefer full sun mixed with well-drained soil, and display a bicolor of deep-violet to white.

Because of its showiness, this variety of Saliva can be placed in a variety of gardens including cottage, wildlife, exotic, and patio. And as an added bonus, Salvia greggii hyb. Is deer resistant and can be a nice cut flower addition to an indoor display.

Didn’t see anything you liked? Here are some honorable mentions that didn’t quite make the list but still attract hummingbirds:

What is a hummingbird?

Hummingbirds are fast, unique, and migratory creatures all rolled into one family of tiny birds. One interesting fact is they are the only birds who can fly backward, upside down, and also hover in a single location. They also contain a high metabolism, causing them to eat about every 10-15 minutes in order to survive, which adds up to roughly 1,000-2,000 plant visits every day. However, this feat has become increasingly difficult for hummingbirds as habitat loss from development decreases their access to their food source of nectar.

What species of hummers can be expected to be visiting your garden?

If you’re from the midwest, you’ll more than likely be spotting a Ruby-throated hummingbird making a pit-stop in your garden. These almost famous birds can be found in the midwest and eastern states of the U.S. They’ll build their nests in woodlands near fields, forest edges, and meadows, and backyards.

If you call one of the south to southwestern states home, there’s a better chance of spotting a black-chinned hummingbird in your area. One way to tell is by their pumping tail while flying about. This species has become more adaptive and can be found in urban gardens as well as recently disturbed habitats.

How to attract hummingbirds

If gardening isn’t your niche, hanging hummingbird feeders is the next best thing. As hummingbirds can spot bright colors more easily; thus, these feeders usually are red with yellow “flower petals” and can be found in most hardware and box stores or a local nursery.

If gardening is a fun hobby for you, there are numerous ways to attract a hummingbird to explore (and a reason to return) involving flowers. But choosing the right ones to incorporate into a garden can become overwhelming with so many plant options out there. So let’s go back to the basics.

What kind of flowers are hummingbird favorites?

As hummingbirds have adapted alongside the plants throughout their territory or habitat, native plants are an easy, low-maintenance choice for any gardener; plus, each one provides abundant nectar to any pollinator in the area. However, not all native wildflowers were made for hummingbirds. Plants with large, red (but not always as this post describes), tubular flowers are the characteristics hummingbirds go after the most because of their long beaks and attraction to bright colors. 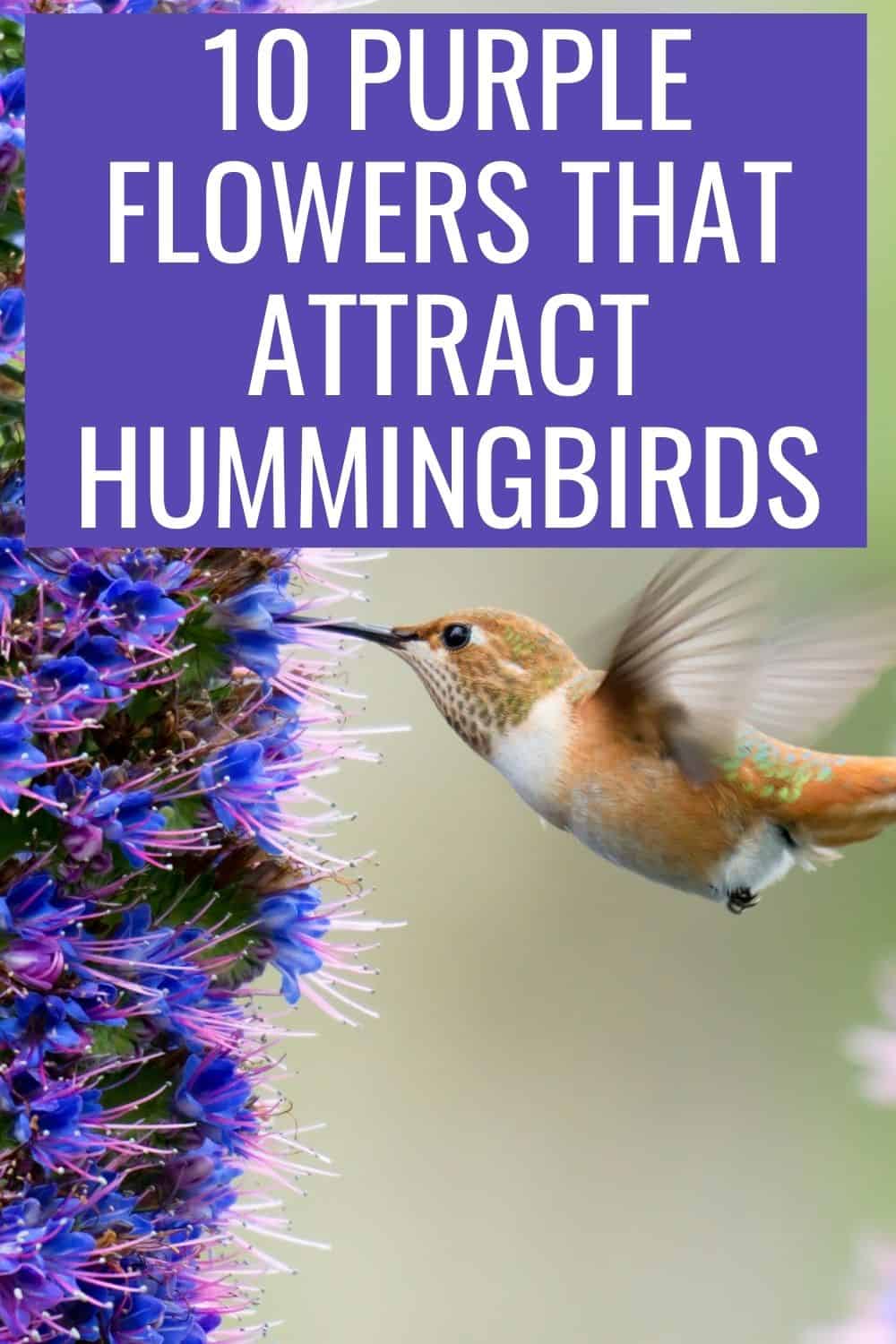 What Do Hummingbirds Eat? A Quick And Easy Guide To Feeding Hummers

What Are The Best Companion Plants For Echinacea (Pictures)

[…] increases pollination for your Coneflowers and other perennials because it attracts hummingbirds, bees, and […]

[…] Too much direct sun can burn them. This is a great flower for attracting hummingbirds to your garden. […]

[…] June to September and like dry, sandy, well-drained soils and full sun to part shade. They will attract hummingbirds to your garden and also other […]

[…] likes partial shade and moist, rich soil. This is a great flower for attracting hummingbirds and other pollinators. The seeds of the American bellflower germinate easily and are great for even […]