You tuck cucumber vines into the soil while dreaming of the fresh, crunchy fruits and tart pickles to come. And then one day you walk into the garden to find holey, sickly plants in place of the lush foliage you expect. Upon closer inspection, you might notice the tiny insects infesting your beloved plants: cucumber beetles. But don’t despair! Read on to learn how to get rid of cucumber beetles and save your precious crop. 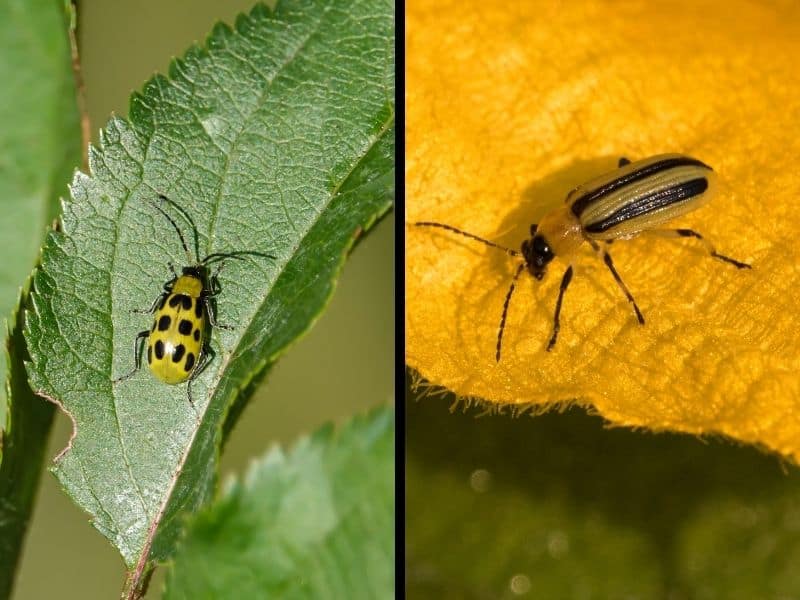 How To Get Rid Of Cucumber Beetles

How to identify cucumber beetles 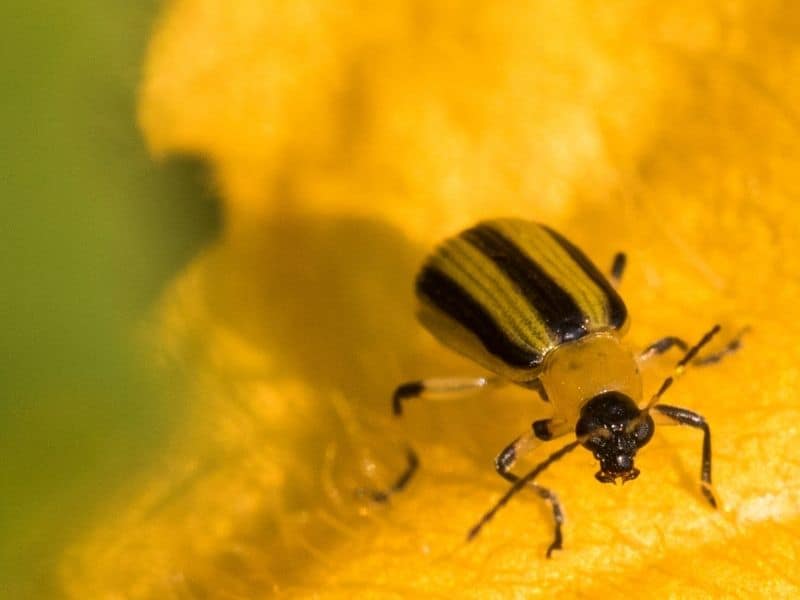 Although only about 1/5 inch long, striped cucumber beetles stand out with bright yellow wings featuring three black stripes down their length. They have a small black head and antennae and an orangish prothorax, which is the area right behind the head. 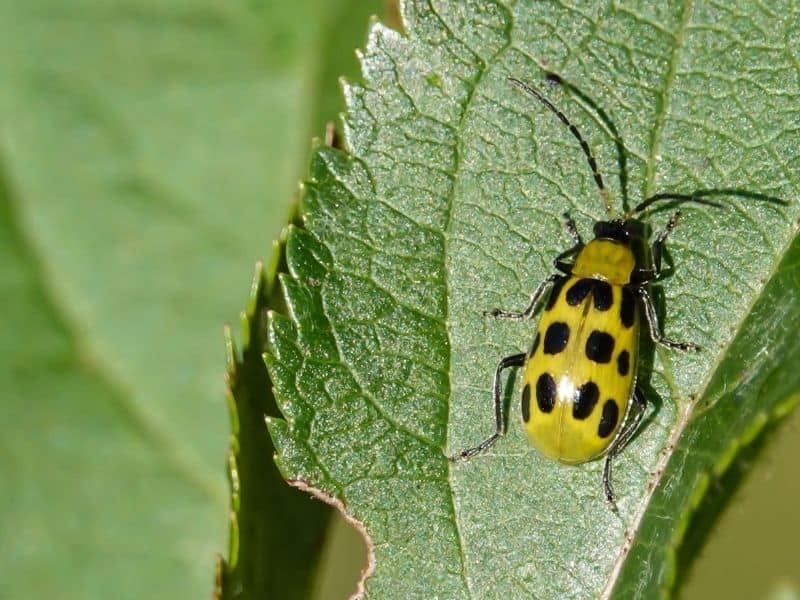 Spotted cucumber beetles resemble their striped cousins, with a similar size and a black head, orangish prothorax, and yellow wings. However, in place of stripes, they have 12 black spots on their wings.

Cucumber beetles can be found on cucurbit plants, including cucumbers, melons, and squash. In the spring, adult cucumber beetles feed on the cotyledons, stems, and emerging leaves of young plants. The females then lay eggs around the base of the host plants, and larvae hatch several weeks later to feed on the roots. However, the larvae do not have any noticeable effect on the plants. Later in the summer, the adults of this new generation feed on foliage and flowers, and if the population is high enough, stems and fruit as well.

Most damage appears as holes in leaves and flowers. Any scarring to the fruit is purely cosmetic, so you can still wash, peel, and eat your affected cucurbit crops.

Unfortunately, cucumber beetles can carry the pathogen that causes bacterial wilt, a serious disease with no cure. Cucumbers and muskmelons are the most affected of the cucurbits. Symptoms include wilting and discolored leaves; to confirm the disease, cut a symptomatic stem in half and hold the two ends together for about 10 seconds, then slowly pull them apart. A whitish, mucus-like string indicates bacterial wilt.

Note that squash bugs, squash vine borers, and drought can also cause wilting, so check for signs of these causes as well. If a plant exhibits symptoms of bacterial wilt and no other causes appear to be present, remove and dispose of the infected plant immediately.

How to control cucumber beetles

Cucumber beetle damage can range from annoying to infectious, so of course, we want to know how to get rid of them! Here are a few tips suggested by the extension offices of the University of Minnesota and West Virginia University.

Since overwintered cucumber beetles typically emerge and begin to feed around late May to early June, waiting to plant cucurbits until mid-June can help reduce damage. Not only does this mean that the plants are not present for the peak of spring feeding, but they also do not act as hosts to the eggs and larvae that later cause foliage and flower damage in summer.

Monitor cucurbit plants closely at least until they grow their third set of true leaves, as they are the most vulnerable in these early stages. Pick off any cucumber beetles you notice, either squashing them or dropping them into soapy water. This can both help prevent population growth and alert you if large numbers are already present and require more aggressive treatment.

When you plant your cucurbits, placing a thick layer of mulch around the plants can help deter cucumber beetles from laying eggs in the soil. The mulch will also help retain moisture for healthier plants and suppress weeds that might act as additional hosts for the pests. Speaking of which, make sure to pull up any weeds that do poke through.

If any plants show signs of bacterial wilt (see the section on damage, above), remove and discard them immediately. And finally, remove all garden debris at the end of the summer to reduce shelter for overwintering cucumber beetles.

Trap crops will attract cucumber beetles to themselves rather than to your main cucurbit crops, allowing you to dispose of the plants and the population of beetles infesting them.

Two weeks before setting out your desired cucurbits, plant attractive host plants like blue Hubbard squash, other buttercup squash, or zucchini in an unused part of the garden or border.

Once a sizable number of beetles shows up, spray the trap crop with an organic pesticide or stuff the plants into garbage bags — gently, so as not to shake off the insects you’re trying to dispose of. Burning the plants may also be effective.

Another method for preventing cucumber beetles is the use of a physical barrier. From the time of planting through about mid-June, keep a row cover over your cucurbits so the pests can’t reach the plants. Once the plants begin flowering, though, they should be uncovered to allow pollinators access to the blossoms.

Pesticides should only be used as a last resort. If you have a particularly aggressive cucumber beetle infestation and the above methods prove ineffective, it may be time to pull out the insecticides. Look for organic options such as pyrethrum, neem, or kaolin clay to minimize effects on the surrounding environment (we don’t want to kill beneficial insects!) as well as to reduce the presence of toxins in your vegetables.

I’ve found that cucumber beetles can make growing cucumbers a discouraging task. But I also know the delicious crunch of a garden-fresh cucumber, eaten whole with just a sprinkling of salt. If you have experienced the devastation of a cucumber beetle infestation, I hope the above tips can help you grow a healthy crop of cucurbits this summer. Happy munching!

11 Best Companion Plants For Cucumbers (And 6 To Avoid)

[…] attract beneficial insects, like pollinators. They also may deter some insects pests, such as cucumber beetles. Conversely, nasturtiums can fall prey to aphids, though this means they might draw the tiny […]

Garden Pests And Diseases - How To Save Your Vegetables, Herbs, And Flowers